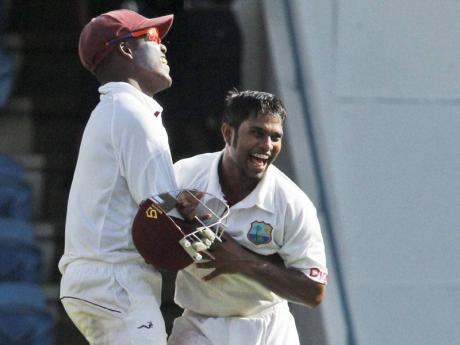 West Indies' Adrian Barath (right) celebrates with teammate Darren Bravo after taking the wicket of Australia's Shane Watson, who was caught behind for 56 runs during the opening day of the second cricket Test match in Port-of-Spain, Trinidad, yesterday. - AP

Off-spinner Shane Shillingford bowled impressively in his first Test in nearly two years to help West Indies put the brakes on Australia, on the opening day of the second Test yesterday.

The right-armer finished the day with two for 56 from a marathon 32 overs as Australia, winning the toss and batting, closed on 208 for five at Queen's Park Oval.

Vice-captain Shane Watson top-scored with 56 and captain Michael Clarke got 45, but neither could convert starts into big scores on a difficult surface.

When Watson became Shillingford's second victim in the last session, West Indies were on top, but the resilient Mike Hussey and rookie wicketkeeper/batsman Matthew Wade saw the Aussies to safety with an unbroken 30-run, sixth-wicket stand.

Hussey was unbeaten on 26 while Wade finished on 16.

Both left-handers survived chances as Hussey was dropped on five by wicketkeeper Carlton Baugh off Shillingford at 173 for four and Wade survived a sharp chance to Kraigg Brathwaite at silly mid-on off off-spinner Narsingh Deonarine when he was two.

Australia also rode their luck in the opening hour as left-handed openers Ed Cowan and David Warner survived a testing opening burst from West Indies seamers to put on 53 for the first wicket.

Warner hit a customary breezy 29 from 42 balls with four fours while Cowan, quick on the pull but suspect on the front foot, got 28 off 74 balls with five boundaries.

On a pitch offering precious little assistance to the faster bowlers, the new ball pair of Kemar Roach and Fidel Edwards bowled impressively to beat the bat on several occasions.

There was drama in the first over of the innings when Warner was given out caught behind for four off the sixth ball from Edwards but captain Darren Sammy quickly withdrew the appeal, indicating the ball had not carried to Baugh.

Replays showed, however, that the ball had brushed the pad - and not the bat - on the way though and there was a strong case for an lbw verdict.

It was Shillingford who got the breakthrough with the fifth ball of his first over when he had Warner caught at slip by Sammy, driving at one that turned fractionally.

Cowan's labour ended 14 minutes before lunch when he play across a straight one from Roach and was adjudged lbw.