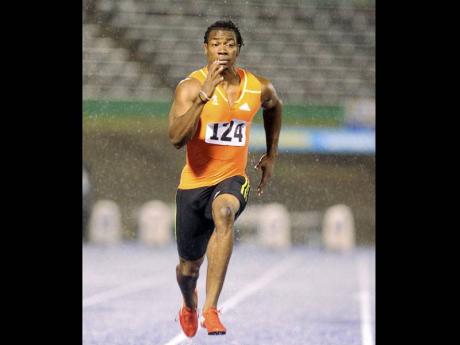 Yohan Blake powers through the rain on his way to winning the men's 100 metres in 9.90 seconds at the University of Technology Classics, at the National Stadium on Saturday. - Ricardo Makyn/Staff Photographer

He described it as a "good, little run", but Yohan Blake's blistering 9.90 clocking in the men's 100m, done in pouring rain at Saturday's fifth staging of the University of Technology (UTech) Track and Field Classics inside the National Stadium, was much more.

Blake, helped along by a +1.6 m/s wind, recovered from a 'so-so' start to stamp his class on the field and register the fastest time in the world over the distance so far this season.

It was a positive end to a productive shift for the 100m world champion, who had earlier run a monster leg on the backstretch to help power the Racers Track Club - anchored by double Olympic champion and world record holder Usain Bolt - to an emphatic win in a meet record 37.82 seconds in the Invitational 4x100m ahead of the Asafa Powell-anchored MVP team, which clocked 38.27.

"I just came out here to have some fun. I showed that I was in pretty good shape in the 4x100m earlier. Didn't get a good start here (100m), but I recovered well and followed through for the win," Blake told The Gleaner.

"I could have pushed some more towards the end and gone faster, but coach told me to take it easy today and that's what I did," he added.

Earlier, Bolt, who according to some reports twice delayed his start to the season for unrevealed reasons, showed the world that he is in good shape, receiving the baton two strides ahead of former 100m world record holder Powell, before kicking into high gear and extending the lead towards the finish line.

"It was my first run and I am happy I got through, it was a bit chilly with some rain, but this is what we are used to in Europe so it is ok," said Bolt, who added that he always looks forward to these MVP vs Racers clashes.

"For me it's always like this, this is not the first time that we are running together, it's just one of those things and it's always good to run against each other and it's good for the crowd because they came out to see a good meet," Bolt told The Gleaner.

For those expecting Jamaica's top athletes to suffer some sort of disadvantage in London's notoriously rainy weather at this summer's Olympics, think again.

"I am used to this from competing in Europe, people say it's going to be a good summer but for me I just put my mind to anything because it's always rainy and cold (in London)," said Bolt.

"I love to run in London, the condition doesn't matter to me, I always come out to perform and have fun," Blake said.

Overall, the meet missed its spark as several high-profile athletes did not show up, including Jermaine Gonzales, Olympic champion Shelly-Ann Fraser-Pryce, who was listed as 'questionable' and Melaine Walker, along with world champion Brigitte Foster-Hylton, who is believed to have been uncomfortable with the weather conditions, after suffering injury at the same meet in similar weather in 2010.

World indoor silver medallist, Nesta Carter, 20.48, was one of the brightest sparks for MVP as the powerful sprinter produced a late burst of speed to take the men's 200m ahead of Racers' Daniel Bailey, 20.60 and GC Foster's Rasheed Dwyer, 20.71.

"It was the first (200m) race for the season, people backing out because of the rain but I came out here, took it easy on the corner and got a 20.4; that's a good time for me," said Carter.

UWI's Hansle Parchment set a new record in the men's 110m hurdles, winning in 13.71, while Olympic finalist Rosemarie Whyte (Racers) was also impressive, winning the women's 400m in a world-leading 51.13 ahead of the MVP pair of Anneisha McLaughlin, 52.49, and Stephanie McPherson, 52.98.

MVP's Sherone Simpson, who had the previous best time in the world, failed to finish the event after tightening up at the 350m mark.