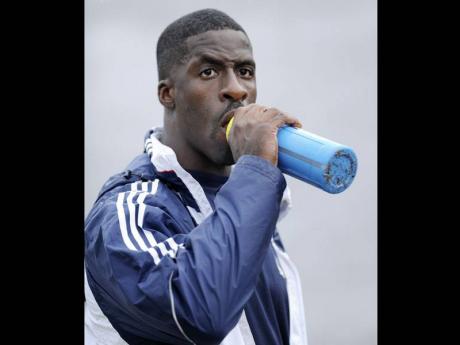 British athlete Dwain Chambers drinks from his water bottle during the University of Technology Classics track and field meeting at the National Stadium on Saturday. - Ricardo Makyn/Staff Photographer

"Training has been kicking my behind, but I am loving it."

British sprinter Dwain Chambers has been making the most of his time in Jamaica, training with MVP Track Club even while he hangs on to slim hopes of competing at this summer's Olympic Games in his backyard.

Chambers was banned for two years in 2003 after testing positive for THG - a performance enhancement substance and was consequently barred from taking part in the Olympics by UK Athletics. He is, however, hoping to have that stance overturned through the courts.

In the meantime, the powerfully built sprinter is preparing in the best way he can, peeking at the Olympics from the corner of his eye.

"I am taking advantage of the weather, the food, the world-class athletes, it has been fantastic," Chambers told The Gleaner. "I have been here four weeks and I will be here for another six weeks. The experience has been great, I have Jamaican heritage, my parents are from here and I have always been back and forth and I have had a good time here and I am hoping that it will help me to be better this year."

Chambers was the lead off runner for the MVP (38.27) team that finished second to Racers, 37.82, in the Clubs and Institutions 4x100m relay at the University of Technology Track and Field Classics inside the National Stadium on Saturday night.

"It felt good, this is the weather I am used to in England actually and no matter what, it was great to be here and to compete at this capacity was fantastic," Chambers added of the rainy conditions at the meet.

"These are the guys that I have watched and competed against over the years and it's an, honour to compete and train with them now on a regular basis and I am just hoping that it works well for me this year," he added.

As it relates to his chances of competing in London later this year, Chambers admitted that it remains an ambition of his and is hoping for a resolution.

"No word as yet (on whether or not he will be allowed to compete). I just have to put it to the back of my mind. If I said I wasn't thinking about it I would be lying, but I have to be professional and use this good atmosphere to keep my mind occupied," said Chambers.

"It's my home Olympics and I am a British athlete and ultimately I would like to compete, but I just have to wait and see."