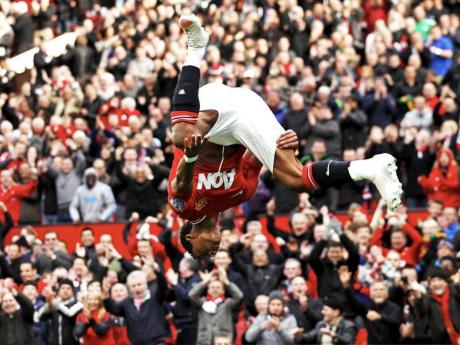 Young won a penalty in United's previous match at Old Trafford after also appearing to fall easily in the box.

Danny Welbeck hit United's second in the 43rd minute, before Rooney scored again in the 74th and substitute Nani added a fourth in stoppage time.

But Tevez boosted the lead with a header and Aguero's solo effort added the gloss before Tevez rounded Ruddy to complete his hat-trick and Adam Johnson slotted in from close range.

Wolves halted a run of seven defeats with a well-earned draw at theStadium of Light, but are five points adrift at the foot of the Barclays Premier League table. Sunderland had the better of a tame first half, James McClean firing into the side netting after a neat move. But the Black Cats created little after the break and Wolves looked likelier winners, Steven Fletcher's header smartly kept out by Simon Mignolet.

The stalemate meant a first clean sheet for Wolves in 31 matches.

Blackburn's survival hopes took a massive nosedive with a comprehensive defeat at the hands of classy Swansea. Gylfi Sigurdsson opened the scoring for the home side, curling in a delightful left-footed effort.

Scott Sinclair pounced on a Scott Dann error to supply Danny Graham, who teed up Nathan Dyer for the second. David Dunn spurned chances for Rovers but their fate was sealed when Dann knocked the ball into his own net after Sigurdsson had struck the post.

Queens Park Rangers' poor away form continued as they lost narrowly to West Bromwich Albion to remain just two points clear of the relegation zone. Graham Dorrans' first-half belter means the Londoners have picked up two points from their last 11 away matches. Billy Jones hit the post for West Brom in the second half but QPR will rue the chances they spurned in this game. Ben Foster twice saved efforts from Bobby Zamora,who also went close with a header before skewing a shot late on.

Andy Carroll's late header sent Liverpool through to the FA Cup final as they came from behind to beat Everton at Wembley. Nikica Jelavic took advantage of a mix-up between Jamie Carragher and Daniel Agger to give Everton the lead midway through the first half - but an Everton defensive error just after the hour gave the Reds a route back to their second major Wembley final this season.

Sylvain Distin's backpass never carried the weight to reach Everton keeper Tim Howard and Luis Suarez raced through and score. And with three minutes left Carroll - who had missed the easiest of chances early in the second half - glanced substitute Craig Bellamy's free-kick past Howard to give Liverpool thechance to add the FA Cup to the Carling Cup they won on penalties against Cardiff.