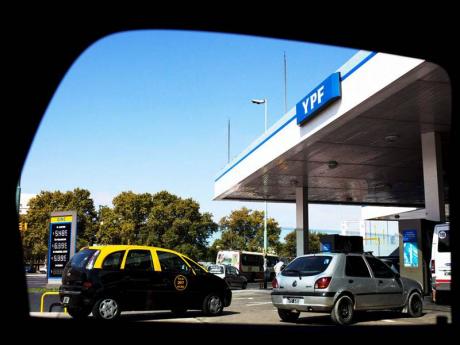 People fill the tanks of their vehicles at a YPF station in Buenos Aires, Argentina, on Thursday, April 12. Spanish Industry Minister José Manuel Soria has warned that the government will interpret any ...

Argentine President Cristina Fernandez on Monday proposed a bill to nationalise the YPF oil company that is controlled by Spain's Repsol, moving ahead with the plan despite fierce opposition from Madrid.

Fernandez said in an address to the country that the measure sent to congress on Monday is aimed at recovering the nation's sovereignty over its hydrocarbon resources. She said the shares being expropriated will be split between the national and provincial governments.

The president complained that Argentina last year had to spend more than US$3 billion to import gas and petroleum.

"This president is not going to answer any threat, is not going to respond to any sharp remark, is not going to echo the disrespectful or insolent things said," Fernandez said to applause from business, union and political leaders at an official event announcing the proposed law.

"I am a head of state and not a hoodlum," she said

Governors of oil-producing Argentine provinces have withdrawn about 15 oil leases, representing 18 per cent of YPF's crude production, alleging the company failed to keep its promises to develop them.

YPF has countered that it has invested millions in those areas and plans to increase production, but Argentine officials have said that still falls short.

How Argentina may try to displace Repsol, which owns 57 per cent of YPF, has been the subject of wide speculation since the government's pressure campaign began in February.

Even with its share prices depressed, YPF is valued at US$13.6 billion, and buying half of that would deplete Argentina's treasury of funds it needs to maintain the populist subsidies that have kept the country's economy afloat.

The president's proposal declares that the exploration and exploitation of hydrocarbons is "of national public interest" and declares that building up the nation's supply is a priority.

Argentina this year expects to import more than US$10 billion worth of gas and natural liquid gas in the face of an energy crisis, according to estimates from the hydrocarbon sector.

CAPTION: People fill the tanks of their vehicules at an YPF station in Buenos Aires, Argentina, Thursday, April 12, 2012. Spanish Industry Minister Jose Manuel Soria has warned that the government will interpret any "hostile gestures" against Spanish companies abroad as an act of aggression, in an apparent reference to a conflict with Argentina over an oil company controlled by Spain's Repsol.