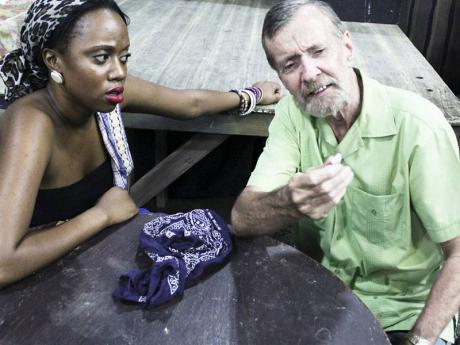 'Mama Nadi' (Risanne Martin) seeks a costing for a piece of diamond from Mr Harari (Bob Kerr) during a rehearsal for 'Ruined' which began playing last weekend. 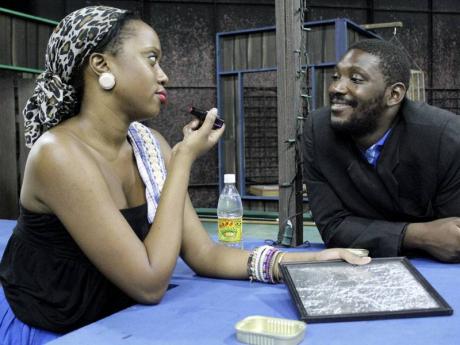 There were a number of cathartic moments in the production Ruined. Playwright Lynn Nottage's story of the devastating effect of the civil war in The Democratic Republic of Congo on the country's women was not lost.

Director Eugene Williams and his cast, comprising a guest performer, graduate performers and students, joined forces to give a memorable presentation of the Congolese play.

Without notice, the Dennis Scott Studio Theatre's stage went black. When the lights returned, Mama Nadi (Risanne Martin) a shrewd brothel owner is standing behind a bar counter. She is in negotiation with Christian (Paul Wilson). Their items of barter are two women, Salima (Rachel Allen) and Sophie (Anique Herbert). Mama wants to purchase one girl. She is fearful that the reason Christian is pushing the second girl is because she is 'ruined'.

Mama's fears are justified. Sophie is indeed 'ruined'. She was gang raped for a sustainable period. Sophie's story is not dissimilar to that of two other girls, Salima and Josephine (Renae Gardner), the three hailing from completely different backgrounds.

Sophie, who is also Christian's niece, is a university student, Josephine is the first daughter of a village chief and Salima is a mother and wife. Mama Nadi also has her story. The collage of personalities and backgrounds points to the disregard those involved in the rape and abuse of women had for who those women were.

After much reporting, and the introduction of the other characters, rebel soldiers, government soldiers, miners and prospectors, the story picks up some momentum.

Fortune is denied the opportunity to see his wife, who has been bought by Mama Nadi. The farmer, who now carries arms for his country, decides he will not leave until he sees his wife whom he had earlier turned his back on, labelling her damaged goods.

Mama Nadi's decision to deny Fortune the opportunity to see his wife also turns out to be her downfall. The decision costs the loss of customers and possibly resulted in the eventual closing of the business. But Nottage's melodramatic ending to her tragedy gives hope and something to smile about.

The end was not the only strength of Nottage's Pulitzer Prize-winning script. In general, it was cleverly written.

The women are fully developed characters and watchers of the play learn much about them, while the soldiers are reduced to one-dimensional conduits of pain.

Williams' direction was good, excluding scene two. In this scene his blocking engulfed spreading the fast-moving actions from one acting area to the next. Otherwise, he moved the actors with much ease. Entrances and exits were well defined. And the Ron Steger-designed set was very supportive.

Along with the bar, a pool table, dining tables and chairs and an area for a live band, there was also an elevated platform. It was placed centre stage left and used as a small bedroom for the girls. The upstage areas showed the front of the brothel and produced the exciting spectacle of rainfall.

The cast of varying degrees of experience and stages in their acting career gave convincing portrayals of their characters. It was interesting how well the cast adapted the French-sounding accents. The student actors and actresses such as Wilson and Allen understood their tragic characters and performed accordingly.

Graduate performers Martin and Samuels were just as convincing, although Martin started a bit weak.

The production of Ruined runs for a second weekend at the Edna Manley College of the Visual and Performing Arts. Go see it, however, please note that because of its adult content and language, the play is not suited for children under 16 years of age.

The play takes place on Friday and Saturday at 7 p.m. and at 6 p.m. on Sunday.