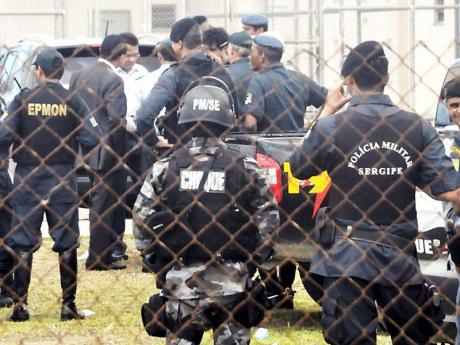 Inmates armed with guns and knives seized control of a prison in northeastern Brazil and local news media reported yesterday that the prisoners were holding about 80 visitors and two guards hostage.

No deaths or injuries were reported in the revolt that began Sunday at the Advogado Antonio Jacinto Filho prison in the coastal city of Aracaju.

Negotiations were under way with the penitentiary's 470 inmates, who have released more than 40 hostages and one of the three guards initially seized in exchange for bottles of water, according to the G1 internet portal. Its water and electricity lines were shut off.

Television here broadcast images of prisoners, their faces obscured by swaths of fabric, standing on the facility's roof, shouting to the around 150 police officers surrounding the building, as well as the swarms of journalists and passers-by.

G1, the website of the Globo television network, said inmates were demanding a change in leadership at the prison, as well as better treatment and quicker trials.

The 128 visitors seized during the start of the uprising Sunday were largely relatives, including women and children, who had come to see prisoners during visiting hours.