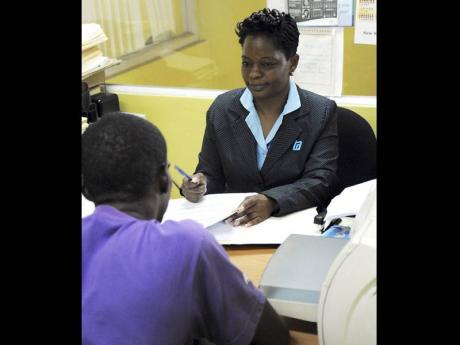 Sandrea Bailey, of the Transport Authority, processes documents for the release of Paul Rumble's impounded vehicle. Rumble was taking advantage of an amnesty that has been put in place at the authority. - Norman Grindley/Chief Photographer

George Spence turned up at the Transport Authority's Maxfield Avenue offices in St Andrew with a tow rope yesterday, determined he would not be leaving his 1989 Toyota Corolla in the pound for another day.

"I am back for my vehicle that was seized three years ago," Spence told The Gleaner on yesterday's first day of a three-month amnesty.

Transport, Works and Housing Minister Dr Omar Davies had announced the amnesty in Parliament saying "the objective is to clear the pounds".

Yesterday, Petra-Keane Williams, communications manager at the Transport Authority, told The Gleaner there has been an encouraging first-day response to the amnesty.

"The customers have responded well to the amnesty. We have had several persons coming in to check the status of their vehicles," Williams said.

"We are encouraging more persons to come in early so that we can process them smoothly," she added.

Yesterday, Spence was among several persons who turned up at the authority's Maxfield Avenue offices to benefit from the amnesty. He said his vehicle was seized by the police and impounded after he was accused of being an illegal taxi operator.

"Because me nuh have nuh money to come back fi it me just affi leave it," Spence said.

Under the amnesty, where the outstanding fees are higher than the value of the vehicle, persons will pay half the valuation on the vehicle.

Micardi Portuondo, another motorist who is seeking to take advantage of the amnesty, has described the olive branch as "a real help for poor people".

"I have a vehicle in the pound two years now and when I hear of the amnesty I was delighted and happy because I could not manage to pay the pound fee," Portuondo said.

Cecil Morgan, the general manager in charge of operations, said the revenue being foregone by the state through the amnesty would run into "hundreds of millions".

He said just over 1,000 vehicles have been identified that are eligible for selection under the amnesty.

"For you to be eligible your vehicle would have to be in the pound for over 30 days and for the complete selection to be carried out they will have to be cleared by the courts," he told The Gleaner.

Davies, when he announced the amnesty, said approximately 1,400 vehicles were in the island's pounds. The authority said fewer than 150 have been in the pounds for three years and over.