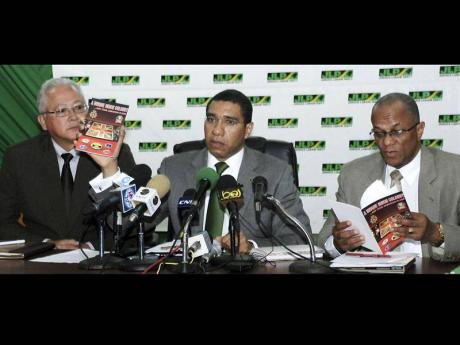 The Opposition Jamaica Labour Party (JLP) has given the Government failing grades for its performance in the first 100 days of the administration, saying the country is at a standstill and Prime Minister Portia Simpson Miller should give a clear signal of her administration's intent to the country.

He said the Opposition cannot be blamed for the apparent inertia, and lack of direction from the Government.

"The Opposition has not been an obstacle to the Government. We have been very calculating and reserved in the way in which we have commented on the Government's performance during the 100 days. As far as we are concerned, the Government has not fulfilled the new direction of promises, that it has been a failure," Opposition Leader Andrew Holness pronounced on the Simpson Miller-led administration.

During a press conference yesterday at the party's Belmont Road, New Kingston headquarters, Holness said the People's National Party administration has failed to deliver in key areas of administration which has resulted in it listing among its achievements, programmes that were started by the JLP administration.

"If you were to look at their list of achievements, they are actually claiming as achievement things that the previous government started. It's not a fundamental point, because there must be continuity and transition in government. But to be absolutely clear, the Government is to be judged not on continuing, not on transitioning, but it must be judged on what new it brings to the table," Holness argued.

Continuing he said: "And what new is the sense of direction. The Government would have campaigned that it would take the country in a new direction, in a direction where there would be employment, respect for the people."

According to Holness, there is still no new agreement with the International Monetary Fund (IMF) even though a two-week timeline was given for the negotiation of a new deal.

IMF officials here had dismissed the suggestion that a new deal could be negotiated before the current one ends.

Holness said the Government inherited some policies which it continued as they were in the national interest. Among them are free health care, free tuition and lower interest on monies - these policies were major campaign promises by the JLP prior to 2007.

He said Government has failed to fully roll out the Jamaica Emergency Employment Programme (JEEP) and has also failed to implement the promised removal of general consumption tax on electricity bills.

The new budget is dependent on a workable IMF agreement.

Holness and the JLP administration were swept out of power in December last year in a massive 42-21 defeat on the promise by the current administration of jobs under its Emergency Employment Programme, the removal of GCT on electricity and more respect and greater inclusion of Jamaicans at all levels of decision making.