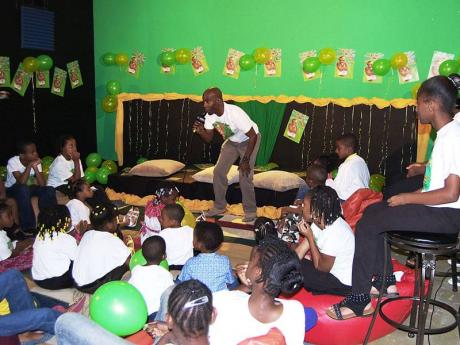 Actor Paul Campbell grabs the attention of children with his Anancy stories during a presentation at Northern Caribbean University, Manchester, last Thursday. - PHOTO BY DAVE LINDO

JAMAICAN ACTOR Paul Campbell last Thursday presented his Anancy Stories CD in Mandeville, a move by himself and two of his friends to keep Jamaica's heritage alive.

The presentation was made at the Northern Caribbean University where Campbell told Anancy stories to a group of children who were intrigued by the interesting and hilarious folklore.

The CD is titled Anancy Stories Volume 1, read by Paul Campbell. The actor, well-known for roles in movies such as the Lunatic and Third World Cop, was upbeat when speaking about the project.

"I think it is so important to our kids these days especially, the younger generation, not my generation, as my generation is very savvy to Anancy stories. It's good for younger kids that are banking on the western philosophy and culture and forgetting their heritage."

The project is a partnership with Campbell and friends Dwight OIiver and Ron Meredith.

Meredith explained how the project came about. "I was in Jamaica in 2006 in Kingston and I decided to go to a bookstore and buy a book. I ended up buying a book on Anancy, which I read on the plane on my way back to Florida. When I reached home, I called Paul and Dwight and said, 'Hey, let's do a CD on Anancy stories'. It took us six years, because it was a challenge trying to get all three of us together."

Meredith added: "It took a while for it to be completed, because there was a big challenge in all three of us being at one place at one time. However, we had fun doing it and the end product can stand up anywhere. The last story we did before we got here (Jamaica) was Jamaica celebrates 50th anniversary."

The CD has eight stories, which is a mixture of traditional Anancy stories and stories written by the three friends. "We had to bring it up to what's happening now, so that kids can relate to it, so we have Anancy having his 4G phone, Anancy driving his Lexus, that sort of thing," Oliver disclosed.

Meredith disclosed that they will soon be releasing a book of Anancy stories and that also they are in dialogue with the Ministry of Youth and Culture in distributing the CDs to schools across Jamaica.