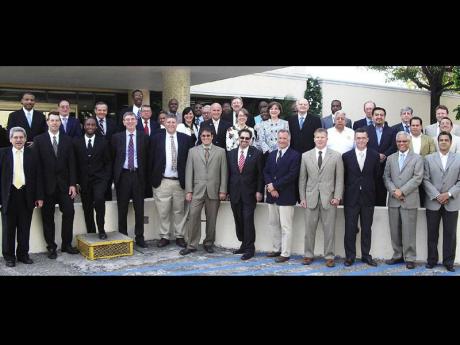 Participants at the Oil Exploration and Exploitation forum in Kingston, April 11-13. They represented Jamaica, Cuba, Mexico, The Bahamas and Guyana.

The Caribbean region, including Jamaica and other Small Island Developing States, lacks the resources to combat a major oil spill, delegates to a regional convention on oil-spill prevention and response were warned this week.

At the opening of the convention to discuss oil-spill prevention, preparedness and response in the Gulf of Mexico, keynote speaker Christopher Cargill, chairman of the Petroleum Corporation of Jamaica, said Jamaica and other islands in the region do not have access to vast amounts of resources to combat major oil spills of the magnitude of the BP Deepwater Horizon incident - which occurred two years ago in the Gulf of Mexico.

"We understand that the BP Deepwater Horizon incident involved 47,000 persons, 600 vessels and 120 aircraft, and the responders had access to a Spill Liability Trust Fund," Cargill told delegates.

"The development of a mechanism for cooperation is, therefore, a critical part of the preparedness in the region as Jamaica and other small states will have to rely heavily on their neighbours to the north for assistance in dealing with such events," he pointed out.

The objective of the convention, held in Kingston, Jamaica from April 11-13, was to further regional preparedness and cooperation to oversee the offshore oil-exploration and exploitation industry, and to improve oil-spill response preparedness and capabilities.

It was the third such forum being held with the aim to complete a Caribbean Multinational Authorities Matrix to aid regional plans towards the offshore oil-exploration industry.

The previous discussions looked at the legal and policy frame work for drilling operations and issues related to preparedness and response to pollution incidents arising from oil and gas exploration and exploitation.

According to Bertrand Smith, director of legal affairs at the Maritime Authority of Jamaica (MAJ), "This meeting is important to Jamaica as we ratified the IMO Oil Pollution and Response Convention two years ago and are currently incorporating its provisions into national legislation to deal with discharges from oil and gas platforms, among other things."

The convention was sponsored by the Maritime Authority of Jamaica and the Petroleum Corporation of Jamaica, under the auspices of the International Maritime Organisation, United Nations Environment Programme and the Regional Activity Centre/Regional Marine Pollution Emergency Information and Training Centre (RAC/REMPEITC).

Representatives who attended the opening ceremony included: Ambassador Pamela Bridgewater, Embassy of the United States (US); Ambassador Yuri Gala Lopez, Embassy of the Republic of Cuba; and Raul Mendoza-Gallo, head of consular, commercial and cooperation Affairs - Embassy of Mexico.

Delegates represented Jamaica, Cuba, Mexico, The Bahamas and Guyana. There were also representatives from RAC/RECPEITC-Caribe in attendance.