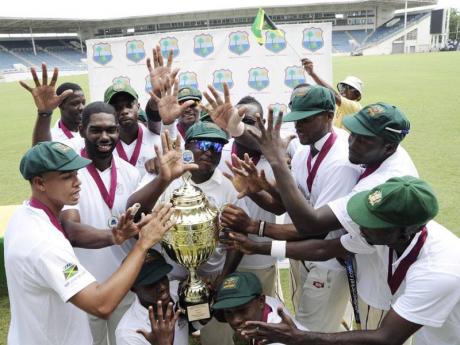 Jamaica's cricketers, including captain Tamar Lambert (at centre in sunglasses), celebrate with the Headley/Weekes Trophy at Sabina Park yesterday after winning the regional cricket title for a fifth straight time. Jamaica crushed Barbados by 139 runs on the last day of the Regional Four-Day final, to complete a dramatic come-from-behind victory. - Riacrdo Makyn/Staff Photographer

Resuming the fourth and final day with the knowledge that only an outright win could land them the title - after surrendering first innings honours - Jamaica were led to victory on the back of some explosive batting, which netted 114 runs off 18 overs in part of the morning session; backed up by a spirited spell of pace bowling from David Bernard Jr and leg-spinner Odean Brown.

Bernard Jr, who claimed the first four wickets to fall, finished with four for 34 and Brown, who wrapped up the tail, ended with three for nine as Barbados, set a victory target of 230, were bowled out for 90.

Jamaica had earlier declared their second innings at 247 for five.

Victory ensured that Jamaica maintained its stranglehold on the George Headley and Sir Everton Weekes Trophy.

"It was a good day of cricket, which started from early in the day with our batting and finished towards the end with the bowlers bowling their hearts out," said Jamaica's captain, Tamar Lambert.

"To win five straight was always our plan from the start of the season and to do so this season without losing any of our eight matches is testimony to the hard work that we have been putting in over the years."

Having reached 133 for two overnight for a 115 runs lead, Jamaica, went for quick runs in the quest for a declaration, and despite the spreading of the field by Barbados' captain Shamarh Brooks, the homesters were able to achieve their goal.

Leading the way were first innings top scorer, Donovan Pagon, who made 45, Lambert, who hit 42 off 47 balls, and wicketkeeper Horace Miller, who chipped in with 22 off 21 balls.

Sulieman Benn, who was named Man of the Match for his match haul of nine wickets, finished with four for 67 in the second innings, while Craig Brathwaite, with whom he bowled unchanged throughout the morning session, ended with one for 101.

Barbados came into the match having also won four straight titles like Jamaica.

Any intention to end the Jamaicans' sequence went through the window with a disastrous second innings start.

With just two runs on the board, they lost the wicket of Rashidi Boucher - who made a half-century in the first innings - without scoring. The opening batsman was caught by wicketkeeper Miller for nought after attempting a lazy drive outside off stump.

Two overs later, it became six for two when left-hander opener, Omar Phillips, looking to shoulder arms to another outswinger, got an edge and was snapped up at second slip by Pagon.

Things got better for Jamaica five runs later when Kyle Hope, not picking up the length of another outswinger from Bernard Jr, edged to first slip and was caught low down by Lambert to leave the Barbadians reeling at 11 for three.

Dwayne Smith joined Jonathan Carter, but after facing his very first ball, Smith could not control a rising, outswinging delivery from Bernard Jr and was snapped up courtesy of a low diving catch at third slip by Danza Hyatt at 11 for four.

Brooks was the next man in, and along with Carter added 15 for the fifth wicket before Carter was sent back for 12 by Andrew Richardson, leg before wicket, with a team total 26 runs on the board.

The score should have read 26 for six in the very next over, with Bernard Jr getting a deserved fifth wicket. However, Danza Hyatt, fielding at silly mid-on, could not hold on to a catch off wicketkeeper Shane Dowrich, when he had scored one.

Dowrich and Brooks were able to move the score to 39 for five at lunch, then extended the score to 68 after the resumption.

However, Dowrich, prodding to a delivery out of the bowler's footmarks, was caught at silly mid-on off Nikita Miller for a top score of 32 to leave his team 68 for six.

Barbados lost their seventh wicket without addition, as Brown came to the party and dismissed the defiant Brooks for five.

Three runs later, the leg-spinner claimed the scalp of Javon Searles, without scoring, and last man out Tino Best, who went for eight.

"We knew what Jamaica's plans were while batting. I thought they went about their job brilliantly," said Brooks.

"Our job was to then hold our heads down and bat, which we didn't. But full credit to Bernard Jr, he bowled excellently, and it enabled Jamaica to pull off a deserving win.

"We just have to learn from the experience and hopefully we can perform better next year," he added.

T Lambert not out 42