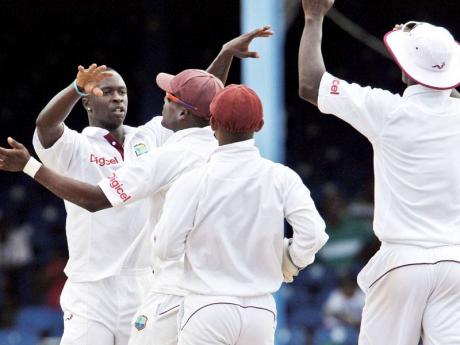 West Indies' bowler Kemar Roach (left) celebrates with teammates after the umpire ruled the LBW of Australia's batsman Michael Beer to dismiss him for two runs during the second day of their second cricket Test match in Port of Spain, Trinidad, yesterday. - AP

West Indies were left facing a tall order yesterday after their inexperienced top order was exposed on the second day of the second Test against Australia at Queen's Park Oval.

Responding to Australia's 311 all out, West Indies stumbled to 49 for three at the close, still 262 runs adrift of their target and with much to do on a difficult pitch.

Stylish left-hander Darren Bravo was unbeaten on 16 while veteran campaigner Shiv Chanderpaul was one not out, when fading light ended play with several overs left in the day.

West Indies had earlier done well to wrap up the Aussies innings after the tourists had threatened to run away with the game courtesy of an 89-run seventh wicket stand between Mike Hussey and James Pattinson.

The left-handed Hussey, mis-stumped by Carlton Baugh on 47, stroked 73 off 207 balls with four fours and a six, while Pattinson hit 32 off 119 balls with five fours.

However, fast bowler Kemar Roach claimed five for 105, his third five-wicket haul in Tests, as West Indies sent the last four Aussie wickets tumbling for 14 runs in the space of just 28 balls.

Off-spinner Shane Shillingford finished with three for 92, while part-time off-spinner Narsingh Deonarine picked up two for 32.

West Indies were in early trouble when Kraigg Brathwaite fell without scoring for the second time in as many innings, lbw to seamer Ben Hilfenhaus in the fourth over of the innings without a run on the board.

Left-hander Kieran Powell played fluently for 19 off 33 balls, adding 26 with Adrian Barath, who never suggested permanence in 41 balls at the crease.

It was no surprise when Barath played back to left-arm spinner Michael Beer, who shared the new ball with Hilfenhaus, and was palpably lbw.

Powell followed suit, playing back to pacer James Pattinson's first ball of the innings to also go lbw, leaving the innings in turmoil at 38 for three.

Earlier, West Indies got an early breakthrough after Australia resumed the day on 208 for five before the ever reliable Hussey led the fightback with Pattinson.

West Indies struck in the day's second over without a run added when Roach induced Matthew Wade (11) to nibble at one outside off-stump, for Bravo to take a regulation chance low to his right at first slip.

Hussey and Pattinson took Australia to lunch at 267 for six before rain, which resulted in the loss of 100 minutes after lunch, also arrived to further frustrate the Windies.

Their partnership, which started before lunch and continued afterward, ensured Australia gathered precious runs in face of excellent bowling from the Windies seamers.

Both players played and missed in the face of testing spells from Roach and fellow fast bowler Fidel Edwards, but weathered the storm to grow in confidence.

It took Deonarine to finally break the partnership, inducing Hussey into a rare false stroke and having him caught at short cover by Brathwaite at 297 for seven.

Without any run added in the next over, Pattinson followed Hussey back in when he was caught close in after getting a leading edge off Shillingford.

Roach then cleaned up the tail swiftly, bowling Ben Hilfenhaus for five off his pads and trapping Michael Beer lbw for two.