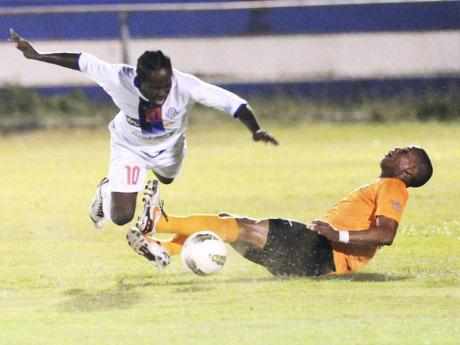 Portmore United will be looking to lock up the 2011-2012 Red Stripe Premier League (RSPL) on their home turf, Ferdie Neita Park, when they tackle Humble Lion next Sunday. Then and only then will they celebrate.

The leaders and favourites rebounded from an unimpressive first half last Sunday, the concession of an early goal and the ejection of substitute Recardo Morris in the 63rd minute - shortly after entering the field - to earn a 1-1 draw with defending champions Tivoli Gardens, which pushed them up to a virtually unassailable 66 points.

Dane Kelly scored for Tivoli in the 17th minute, while substitute Roen Nelson equalised from the penalty spot in the 76th minute.

"We are not in a celebratory mood right now, but I am very much happy with this point for me tonight," said coach Calvin Lewis at the end of the game.

"I told the players that this (championship) could go to the third game of the round, and that is what is going to happen," added Lewis, who refused to get excited even though the title was basically in his team's hands.

Lewis reasoned that as long as there was a mathematical chance of his team being bettered in the race for the title, he would not celebrate.

"There are three games to go and we are nine points ahead, so we have to look at the goal difference. The important thing right now is to lift the crown at home come next week Sunday when we play Humble Lion.

"We only need a point then to lift the crown, so we can look forward to the crown on Sunday," the confident Lewis said.

So confident was Lewis that he said champagne will be on hand and on ice.

"Boys' Town will play Tivoli on Sunday and Tivoli are playing like a team that want to finish in the top two. They played us very hard. They played a good game tonight," he said, expressing confidence in his team to get the one point from a team that has not beaten them all season and that Tivoli Gardens will better Boys' Town, the only team which has a chance of catching Portmore.

Despite not getting the three points he wanted from the game, Tivoli Gardens' assistant coach, Alvin Shaw, praised his players for their display against Portmore United.

"I am going to give the players a lot of credit. I think they gave a good account of themselves. We stuck to our game plan pretty much, and over the last couple of days leading up to the game, we had implemented a system about how we were going to approach the game. they came in today and carried out the job, so I am going to give them credit despite Portmore being a man down and coming back to draw the game," Shaw said.

He noted that his team will keep going for full points in their remaining games.

"Our next match will be against Boys' Town, which will be another tough game. They will be coming to our home, and like I stated a couple weeks ago, our objective is to try to win every game try to accumulate maximum points and see where it takes us."