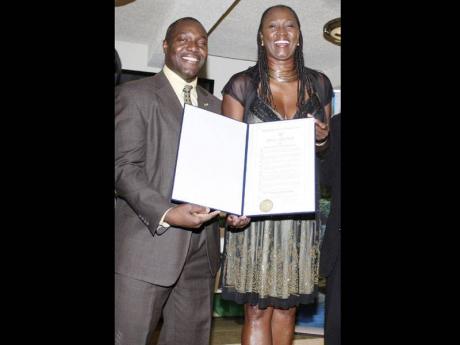 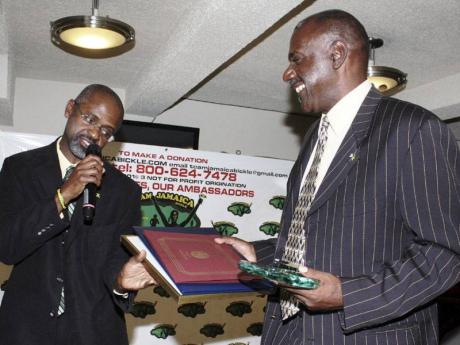 Two of Jamaica's most prolific Olympians, Grace Jackson and Bertland Cameron, were both presented with proclamations from the office of Yvette D. Clarke, 11th Congressional District, New York; and ranking member of the Homeland Security Committee and member Small Business Committee, in the United States Congress in honour of their outstanding contributions to sports, both on and off the track.

The proclamations were presented at the Team Jamaica Bickle (TJB) annual reception and awards ceremony last Thursday in New York.

The function was hosted by fellow Olympian and master of ceremonies for the evening, Devon Harris, who captained Jamaica's 1998 Winter Olympic bobsled team.

The office of Leroy Comrie, councilman, 27thDistrict, Queens, presented the honourees with citations and official letters for their exemplary service.

Irie Jam Media (community service awardees) and Team Jamaica Bickle, for its work on behalf of the athletes, were also presented with citations.

"Both Bertland and myself are extremely grateful to be recognised by an entity (TJB) who like ourselves are working hard to make a difference in sports," said Jackson.

"To do something that you love and be honoured by your peers is an extraordinary feeling. Bert has expressed the wish that those who benefit from TJB's efforts should get a chance to experience (as we just did) all the work that goes into making everything possible; kudos to the hard-working team of volunteers of TJB," she added.

Natalie Neita-Headley, minister without portfolio in the Office of the Prime Minister with responsibility for sports, delivered a specially recorded message to the honourees on behalf of the government and people of Jamaica, in which she spoke of her " ... delight in joining Team Jamaica Bickle and the diaspora in celebrating Jamaica's best assets; her people ... against the backdrop of Jamaica's 50thanniversary of Independence".

A full house witnessed the occasion, with members of the community, stakeholders of the sports and entertainment industry and business community showing appreciation for the honourees.

"We are overwhelmed by the outpouring of love and we thank the community wholeheartedly. It was indeed a special evening as we celebrate the nation's 50th anniversary of Independence," said TJB's CEO Irwine Clare.