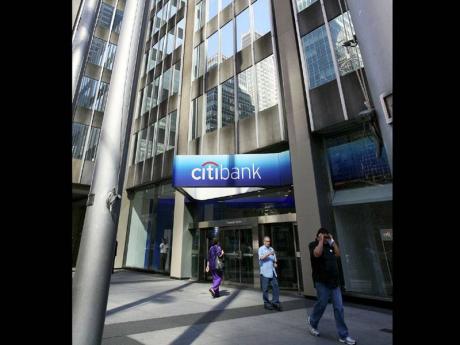 Citigroup, which has 4,600 branches in 40 countries, boasts that it is the most global American bank. That reach paid off big time in the first three months of the year.

Citigroup pulled in record revenue from processing transactions for its international corporate clients, and its loans to customers in Asia and Latin America grew.

The bank said Monday that it made US$2.9 billion in the first three months of the year, on revenue of US$19.4 billion. Both revenue and income fell two per cent from the year-ago quarter, mostly because of an accounting charge related to Citi's debt.

Citi's international reach came in especially handy at a time when rival banks in Europe have pulled back. That's because they own a lot of sovereign debt issued by European countries like Spain and Italy who are struggling to make debt payments.

Citi's first-quarter results extended a string of profits reported by the bank in the last two years. The profits had given Pandit enough confidence to promise shareholders a higher dividend earlier in the year.

But in a setback, the US Federal Reserve in March said that Citi, unlike most of its peers, did not have enough capital to raise its stock dividend and still withstand a financial crisis worse than 2008.

Citi raised more capital in the first quarter by selling stakes in international banks in Turkey, China and India. Pandit wouldn't say whether the bank plans to increase its dividend later this year, since he needs the Fed's OK to do so. Today, Citi gives shareholders a token quarterly dividend of one cent.

"Stay tuned. We'll have more to say later," he said.

One worry for all banks, including Citigroup, is that customers - both consumers and corporations - are saving at a faster pace than they are spending. Citi's total deposits grew five per cent to US$906 billion at the end of the first quarter, while overall loans grew three per cent.

"We would love to put our cash to work in loans, but we just don't see that level of demand at this point of time," Citi Chief Financial Officer John Gerspach said in a conference call with reporters after releasing results.

Citi added US$1.2 billion to its profit from the reserves it had set aside for loan losses because more customers paid credit card bills and mortgages on time. Customer payments late by at least 90 days fell 19 per cent from a year ago.

Just like at rival JPMorgan Chase, Citi's investment banking revenue fell, declining 12 per cent to US$5.3 billion. Volume in the stock market has been light this year. Citi's equity markets revenue fell 18 per cent.

In the first three months of the year, interest rates fell, and the value of most corporate debt rose. Because it would cost it more to buy back its own debt on the open market, Citi had to take a US$1.3 billion charge under accounting rules. That reduced its per-share earnings to 95 cents.

Without that charge, its earnings per share would be US$1.11, which beat estimates of US$1.01 among analysts surveyed by FactSet, a provider of financial data.