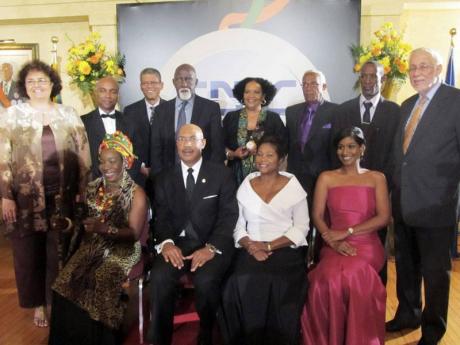 Eight cultural icons were honoured for their contribution to Jamaica, the Caribbean and the world by the Creative Production and Training Centre (CPTC) on Sunday.

But, according to Chantal Hylton-Tonnes, chief executive officer of CPTC, there were well over 200 nominees.

"A committee of seven, made up of our board members and senior management, as well as one or two representatives from the cultural industry, sat down and looked at well over 200 nominations. The interesting thing is we have the winner lined up for the next eight years, because there is such an abundance of talent.

"We came up with this eight this year, introducing the Caribbean Award, because we thought that our cultural expression was so intertwined with that of the Caribbean that we couldn't actually do it just a nationalistic way. We have to take more of a regional approach. Derek Walcott was our Caribbean man," she added.

The eight were honoured with plaques, in speeches, video vignettes, and musical items. The elegant affair, titled 'CPTC Jamaica 50, 2012 Cultural Medal of Honour Award', was held at King's House.

His Excellency Sir Patrick Allen, governor general of Jamaica, was the host.

In his welcoming remarks, he noted, "This evening, we celebrate the works of Jamaicans and those of the diaspora who have worked so hard to keep us together as a people and to keep us as a distinct group of individuals ... even with our different backgrounds."

Sir Patrick went on to laud the recipients of the awards for the way their work transcends generations and ensures Jamaica's cultural identity is maintained for good.

Christopher Samuda, chairman of the board of directors of the CPTC, said his organisation thought honouring the icons was an honour in itself.

The speeches, which included one from Lisa Hanna, minister of culture and youth, were followed by the video vignettes, presented in batches of three. The video presentations, in addition to the provision of the background information on the awardees, highlighted their contributions.

Great performances from Nexxus Performing Arts Ensemble were infused into the presentations.

The group, with accompaniment from two drummers, wowed the audience with Claude McKay's I Feel Like a Motherless Child and a Marley medley.

Plaques were presented by Sir Patrick to the honourees or their representatives. And just before the governor general and Lady Allen made their exit, the Performing Ensemble, now positioned on a balcony, closed the ceremony with a fine rendition of Noel Dexter's Psalm 150.

Lorna Goodison responded on behalf of the awardees.

After the ceremony The Gleaner spoke to Rita Marley, widow of reggae icon Bob Marley. She thought that Nexxus' rendition of Marley's songs was "great. I wanted to join them but wasn't able to. It was fabulous." And on the award ceremony she said, "I thought the night was for Bob Marley. His presentation [in reference to the video] was longer than the rest. I think he is well appreciated."

Representing Claude McKay was his grandnephew of the same name. He thought it was wonderful that his uncle was honoured. And Franklyn St Juste said it was a great thing to be recognised for what you have done.

While the first Cultural Medal of Honour Awards was held two years ago, there are plans to make it an annual event.