Bullet start - 10% spike in British visa applications ahead of Olympics 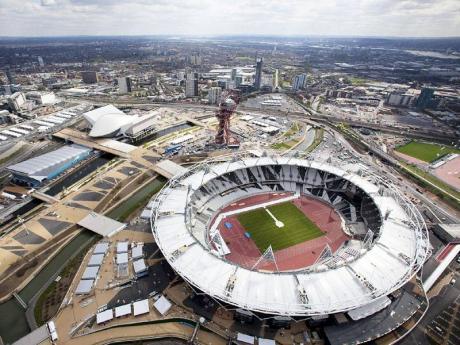 An aerial view of the Olympic Park showing the Olympic Stadium (foreground) and the Aquatics Centre (white building at left). Today marks 100 days before the London 2012 Olympic Games begin. - AP/LOCOG

Jamaicans have been quick out of the blocks in their preparation for the 30th Olympiad in London as the British High Commission in St Andrew has announced a 10 per cent spike in visa applications.

Jamaican nationals are world renowned for doing things at the last minute. But, with more than three months to go before the United Kingdom (UK) comes alive with the panache that attends the world's greatest carnival of speed, Deputy High Commis-sioner at the British High Commission, Graham Glover, told The Gleaner that this year's visa application figures have outpaced the corresponding period last year.

"We process in the region of 11,000 (visa applications) per year (and) we are about 10 per cent ahead of our normal figure for this time of year. There are people who do not want to get caught up in a rush that may or may not happen," said Glover as he addressed an Editors' Forum at The Gleaner's North Street offices.

He added: "We have been having events since January urging people to apply early if they are planning to visit; not necessarily for the games because there are only so many tickets (but) what we are talking about (is) people who are going to the UK at that time anyway to visit family or choosing to be there during that time to enjoy the atmosphere of being in London at that time without necessarily going to any of the venues to take part in the events."

Glover is convinced that a large number of applicants want to visit family in the UK because they want to enjoy the atmosphere of the Games that gets under way in late July.

"A lot of people are coming now and we can post-date their visas to the time that they want to travel," he explained.

Jamaica is fancied to deliver a repeat performance of the national record-breaking feat at the 2008 Olympic Games in Beijing, China. When the curtains came down on what has been hailed as 'the great haul of China', the island's contingent finished with a record 11 medals - six gold, three silver and two bronze - beating, by four, the previous highest tally of seven at the Sydney Games in 2000.

Jamaica has never won more than two gold medals at any one Games before. But in 2008, the island captured three times as many to finish third on the track-and-field table, behind powerhouses the United States - with seven gold, nine silver and seven bronze, and Russia - with six gold, five silver and seven bronze. Overall, with all its medals coming in track and field, Jamaica placed 13th.

The deputy high commissioner is hoping that the early increase is a healthy sign that there will not be a last-minute rush for UK visas.

"It may be that our staff will be sitting around in July with nothing to do. That would be nirvana for us because it would have meant that we got the problem out of the way," said Glover.