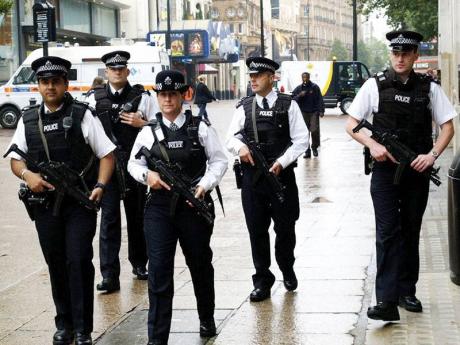 Exactly 100 days before the start of competition at the Games of the 30th Olympiad, a top British diplomat in Jamaica has declared the city of London ready to play host to one of the biggest sporting spectacles across the globe.

Graham Glover, Britain's deputy high commissioner to Jamaica, made the bold declaration even as he conceded that the spectre of terrorism and the prospect of shuttling millions of spectators to and from each event are two of the biggest challenges for the organisers.

"I think London is in a good place, but we don't underestimate the challenge it poses to have these two events," said Glover, making reference to the Paralympic Games which is also scheduled to take place in London between August 29 and September 9.

"On track is probably the best way to talk about it," he added during a special Gleaner Editors' Forum held at the newspaper's central Kingston offices.

Thousands of athletes from more than 200 countries are set to converge on the English capital between July 27 and August 12 to compete in the over 300 events that make up the Olympic Games.

With almost everything in place at all the facilities that will be used during the Olympics, Glover said the test for local authorities over the next three months will be centred on the security and transportation concerns.

He acknowledged that terrorism was a major concern, but insisted that London has learnt its lessons from the 2005 terrorist attacks. Fifty-two persons were killed in a series of coordinated suicide attacks on the city's public transportation system.

"Several shortcomings were highlighted in the report (of the independent inquiry). We have learnt our lessons and some gaps have been filled," Glover disclosed.

He said at present there are no intelligence reports to suggest that the Olympic Games are a target of any terrorist group.

Despite this, the British diplomat disclosed that the threat level around the games has been placed at high.

Without discussing details of the security plan being crafted, Glover disclosed that security for the games would be intelligence-driven, with the police and the UK military playing a supporting role by maintaining a strong presence at all the venues.

"The air force will be available if required, the defence systems will be there to be called on if required, but the greater effort goes into the intelligence gathering before hand so that you can deal with these problems before they become an issue," he said.

"You formulate your plans around what you learn, from your eyes and ears that are out there trying to get inside the various groups who may or may not wish to engage in a terrorist plot during an event like this," he added.

Use of cable cars

Turning to the city's public transportation system, Glover said while it was accustomed to moving around hundreds of thousands of people every week, "the Olympics will be on a much larger scale".

To address this concern, he said the city has created some "innovative transportation solutions" which include the use of cable cars and barges.

The £60-million cable cars went into operation last week and will be used to ferry Olympics spectators to two venues across the River Thames.

In addition, Glover said a system of 26 barges would be used to transport spectators into the Olympic Park on a revolving basis.

"It is about making what already works work better," he reasoned.

Meanwhile, Glover said construction has been completed "for some time" on all the permanent facilities being built for the Games.

The temporary venues to be used, he said, "have been assembled, disassembled and will be re-assembled close to the start of the Games."

He said the track in the main Olympic stadium has already been laid and has been tested with a number of amateur events.

"The seats have been satined, the toilets flushed, all that kind of stuff, those basic things are all in place."