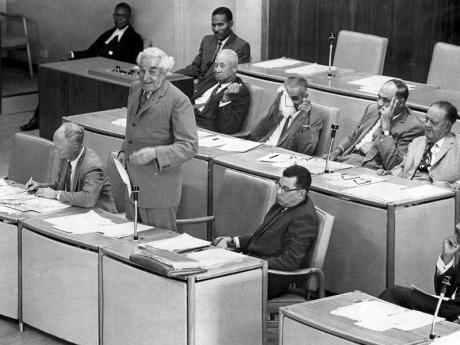 Sir Alexander Bustamante addressing the House of Representatives in 1962. - File 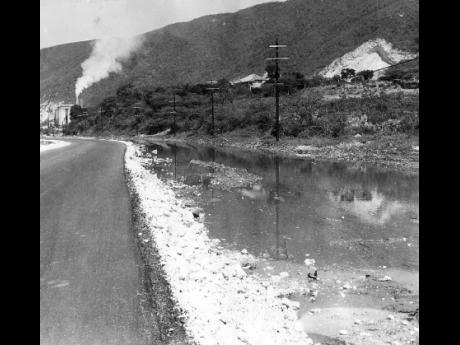 Three travelling post offices, calculated to further speed up the delivery of mail throughout the island, have been introduced by the General Post Office. Each unit comprises a van manned by two postmen, who sort registered and ordinary mail as the vehicle goes along.

These post offices are plying between Mandeville, Savanna-la-Mar, Kingston and St Ann's Bay and Montego Bay.

The postmaster general, in an interview with a deputation from the Jamaica Chamber of Commerce, gave this information when discussions were held on the speeding up of mail delivery.

The system of direct delivery of mail between post offices is being extended, the postmaster general said.

IT WAS officially announced yesterday that the new Government elected as a result of last Tuesday's general election will take office on Tuesday morning.

Sir Alexander Bustamante, who will succeed The Honourable Norman Manley as premier of Jamaica (and to become, after August 6, prime minister), will take the oath of office at King's House at 9:30.

Members of Sir Alexander's Cabinet will be announced that day and will take the oath of office and the instruments of their appointments to specific ministries at 11:30.

The new Cabinet will begin work immediately afterwards. No date has yet been set for the first meeting of the new House of Representatives, and nominations for the Legislative Council will not be finalised before next week.

Sir Alexander, whose party won last week's general election to select the Government for Jamaica's forthcoming Independence, made final decisions on the personnel of the new Cabinet over the weekend, which he spent at Retreat in St Thomas.

Rain has enabled India to carry the fifth and final Test match against the West Indies into the last day, and with an outside chance of saving the match. For with five wickets to fall and three recognised batsmen to come, they were 227 runs behind when rain, 21 minutes after lunch, forced play to be abandoned for the day.

Close of play scores were: West Indies 253 and 283; India 178 and 131 for five. Play on the fourth day of the rain-hampered Test saw the West Indies, in their bid to make a clean sweep of the series, maintain their strong position against the touring cricketers.

All three wickets yesterday fell to Garfield Sobers, who started the morning bowling at medium pace over the wicket, but switched to round-the-wicket and immediately broke the back of the Indian batting by dismissing Mehra, Borde and Nawab of Pataudi with clever variation of his leg-cutters. This gifted player may very well have finished the match off yesterday had the rain not stopped it.

Rockfort Road to finish by August 6

Construction work on the Rockfort to St Thomas road is to be completed in time for Jamaica's Independence celebrations, the city engineer, Jackson Wint, said yesterday.

Wint added that it was regarded as of prime importance that work on the road should be finished by August 6, as it would be the route of the royal procession from Palisadoes Airport, if Princess Margaret comes by air.

Wint explained that the reason for the delay till next week in starting the reconstruction, working from east to west from the roundabout to the Rockfort area, was a wait for the road to dry out and for a section, which had been filled in, to settle.

Wint commented that Caribbean Cement Company was giving a half mile of cement road, near its factory, as an experiment to see if a cement road was cheaper and more durable than asphalt.

A special illustrated magazine supplement for a 1.5 million circulation in the United States, United Kingdom, the Americas and Middle East, to coincide with Jamaica's Independence celebration, is to be published on Sunday, August 5 by the New York Times on behalf of Jamaica's Government.

At today's monthly meeting of the Chamber of Commerce, Walter Fletcher, past president, said several months ago he had approached the Government on the matter and received written guarantee of US$30,000 (£10,714), about a half of the estimated cost.

Fletcher has offered to raise the other half. Already, the demand for space in the supplement is such that it is felt that the Government's payment will be considerably less than the US$30,000.

Tourist figures continue to trend up

The steady upward trend in tourist-arrival figures for 1962 continued during March, as figures released by the Immigration Department revealed increases in both short- and long-stay visitors to the island, said a Tourist Board release.

A total of 10,260 long-stays (over three days) arrived in Jamaica during March, representing a 14 per cent increase over the figure of 9,000 recorded for the same month last year.

The combined totals showed an increase in 6.51 per cent in all tourist arrivals for the month.