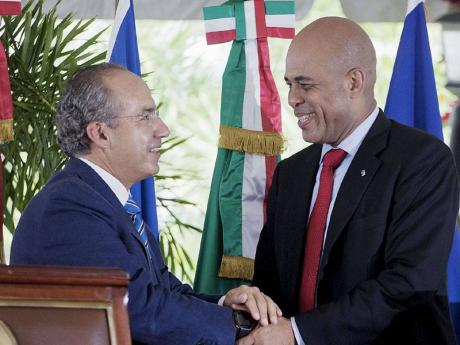 Haiti's President Michel Martelly was being treated for a blood clot in his lung caused by an earlier surgery, a presidential adviser said yesterday.

Damian Merlo of the National Palace said Martelly caught a commercial flight to Florida Monday evening on the advice of a doctor after he experienced chest pains and is now recovering in a Miami hospital, Merlo said. Merlo declined to name the hospital for security reasons.

"He's in good health and resting," Merlo said by telephone. The problem was a side effect of an operation two weeks ago on the 51-year-old president's right shoulder, Merlo said.

Chest pains are a common symptom of a pulmonary embolism, which is a blood clot in the lung, along with palpitations and difficulty in breathing. Severe cases can lead to sudden death.

The medical trip comes several days after Dominican and Haitian ministers accused a retired Dominican military officer and a Haitian accomplice of trying to force Martelly from office. Officials from the neighbouring countries have called the allegations absurd.

Before he turned to politics and was sworn in last May, Martelly spent more than two decades as a keyboard-playing musician known as 'Sweet Micky'.