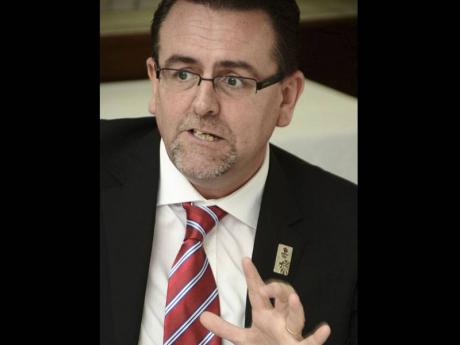 Hosting the Olympic and Paralympic Games will leave an enduring legacy for the city of London.

This is the assurance from deputy British high commissioner to Jamaica, Graham Glover, who was a guest at a specially arranged Editors' Forum at The Gleaner's North Street office to mark the 100-day Countdown to the Olympics.

Social housing, new investment, world-class facilities for international and community use, the creation of new green spaces within the city, and development of the transportation system, as well as the often neglected London waterways, are just some of the benefits that the locals and visitors will be able to enjoy after the Games come to an end later this summer.

More than £11 billion from the public purse has already gone into the staging of the Games, which will be centred in the troubled and needy East London area, a timely social boost for a part of town that largely goes unnoticed.

"It (Olympics) is absolutely vital and it's true that that part of London is the most disadvantaged part of the city, and the decision to put the Olympic Park there was a conscious effort to change that dynamic, by plugging in investment, which otherwise would not have been forthcoming," said Glover.

The British official pointed out that accommodations in the Athletes' Village will be transformed into low-cost housing as soon as the Games have ended, while many of the venues will be scaled down, through the removal of temporary infrastructure, to make them more manageable and effective for use at the community level.

"So you are looking at an Olympic Park, where the housing, which will be used to house the athletes during the Games, will become social housing after the Games. People will move in, and that will become a community within the East London area," Glover shared.

"Many of the venues will be scaled down from what they are at the moment. So the main stadium, for instance, will not become an 80,000-seater white elephant, but scaled down to become a 20,000-seater facility that can be used for multiple sports such as football, but importantly will also be available for track and field," Glover added.

"That's also a part of the legacy component of the Games. The swimming venue will also stay, but it, too, will be scaled down to a much more manageable venue, which can be used for community participation and also for future international swimming events," he noted. "At the forefront of the mind was to build something that will be good for the Games, but also usable at the community level.

"The same goes for the transporting infrastructure, the new high-speed rail link, and so on will revitalise that area of London. You already have developments like the Westfield Stratford City Shopping Centre - which is one of the biggest in Europe - just outside where the Olympic Park is, so it's already attracted business interest in that area for the Olympics and beyond and there is a real hope that this otherwise forgotten area of London will arise from the ashes and become a prosperous part of the capital," said Glover.