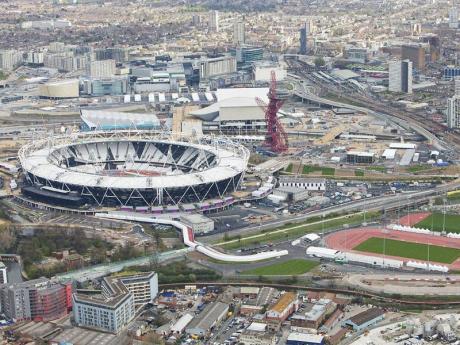 With the opening ceremony just 100 days away, Sebastian Coe is working on the final touches for the London Olympics he hopes will make the difference between "a good and a great Games".

With the new venues in place and the US$14.7-billion project within budget, Coe and his London organising committee are heading into the final stretch with plenty still to do, but without any major crises to overcome.

Today marks the 100-day countdown to the July 27 opening, the climax of a seven-year buildup that centred on the regeneration of a deprived industrial area in East London into the Olympic Park.

For Coe, winner of two Olympic gold medals in the 1,500 metres, the latest symbolic milestone carries significance beyond just the numbers. The clock is truly ticking.

"One hundred days - it sort of means something to people," Coe said in an interview with The Associated Press, with the Olympic Stadium in clear view from his 23rd-floor offices. "When you're talking about seven years, six years, five years, four years, that's one thing, but actually you're talking about days.

"And we're talking 12 Wednesdays or something. It's really very close. The realist in me says, 'Yes, it is 100 days to the opening ceremony', but actually for some ... it's earlier."

More than 10,500 athletes from 204 countries will start moving into the Olympic village two weeks before the opening ceremony, and thousands of journalists will begin working at the press and broadcast centre.

Coe believes Olympic fever will take off in Britain once the Olympic flame arrives in Land's End on the westernmost tip of England on May 19, heralding the start of a 70-day, 8,000-mile torch relay across the United Kingdom (UK).

While the 80,000-seat main stadium, velodrome, aquatics centre and other Olympic Park venues are built and more or less ready for the Games, Coe pointed out that temporary venues still need to be prepared. That includes the central locations of Horse Guards Parade and the Mall where beach volleyball, the marathon, race walk and road cycling will take place. The ExCel exhibition centre needs to be fitted into a venue for five sports.

"We've got a lot of work still to do," Coe said. "We're in really good shape. Through all that, we've not remotely taken our eye off some of the smaller things that ... make the difference between a good Games and a great Games.

"We will all have to do the best work of our lives and we will need every minute of every day in order to achieve that, but I'm confident that we will do that," he added.

Security and transportation remain major challenges. Moving millions of extra passengers around the city on the already-strained public transport system and keeping athletes and spectators safe from terrorist attack have been priorities from Day 1.

"This isn't going to be business as usual," Coe said. "There are going to be differences, whether you're planning your journey to the Games with a ticket in your hand or not. You may be a regular at Wimbledon, but you're going to need more time to get into Wimbledon this time because Olympic security is always going to be better than the Wimbledon championships."

While threats of strikes by underground workers have hung over the Olympics, Coe said he can't imagine the Games being disrupted by labour strife.

"We have a very good working relationship with the trade union movement," he said. "I feel no broadly based instinct for people to want to damage the biggest moment in the lives of all sorts of people in this country, whether they're unionised or not.

"We will never insert ourselves in industrial relations, but my instinct is that we will get where we need to get to."

Coe said the next round of Olympic ticket sales will take place in May - with 2.5 million tickets, including 1.5 million for soccer, available. Anyone who failed to secure any tickets in previous rounds will get a 24-hour window before the remaining tickets go on sale on a first-come, first-served basis.

"Whether it's domestic[ally] or internationally, I don't think there's ever been a demand for Olympic tickets of this order or magnitude," Coe said.