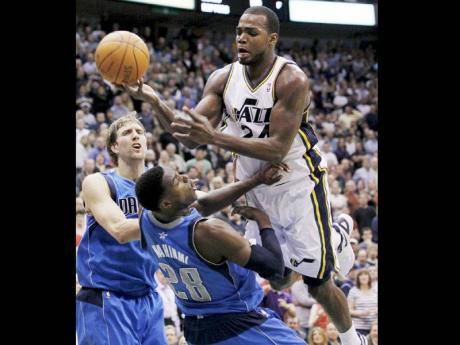 Al Jefferson hasn't been close to the play offs since his rookie season. Seven years later, the Utah Jazz big man is doing everything he can to make sure he's not on the outside looking in again.

Jefferson scored 28 points and tied a career-high with 26 rebounds to fuel Monday night's 123-121 triple-overtime victory over the Dallas Mavericks.

Dallas were coming off an overtime loss on Sunday to the Los Angeles Lakers and Monday's felt just as bad. It was the Mavs' first triple-OT game since December 29, 1989, against Portland, which they also lost.

"It's a disappointing loss," said the Mavs' Rick Carlisle, coaching his 800th career game. "We have to get ready for the next one. There's not a lot of time to belly ache. It was a phenomenal game, the competition was great but we came up short."

Monday's win halted Utah's seven-game losing streak against the Mavericks, but more importantly kept the Jazz in the post-season race.

Utah began the day 10th in the Western Conference, but pulled one-half game behind Phoenix and Houston for the eighth and final spot with four games remaining.

The Jazz (32-30) hold the tie-breaker with the Rockets, but not with the Suns, who they face again next week.

The loss dropped defending champions Dallas to seventh in the West, one-half game behind Denver.

Dirk Nowitzki scored 40 points against Utah for the second straight time. His three-pointer forced the second overtime, but he couldn't convert late in the third extra period.

"The good thing about the overtimes is we knew they were going to kind of run out of gas," Jefferson said. "They are an older team, they played yesterday (Sunday). So we knew the shots were going to start falling a little short. I am surprised they lasted as long as they did."

On Utah's final possession in regulation, Gordon Hayward drove the lane but missed, only to have Millsap fly in for a thunderous put-back dunk.

Nowitzki's long three to win it at the buzzer in regulation came up short.

Utah led by four in the first overtime, only to see Nowitzki force the second extra period with a three with 3.9 seconds left.

Jefferson hit a jumper in the third overtime then blocked Ian Mahinmi's shot, setting up Millsap for a fast-break score and 115-113 lead.

Delonte West sank a three with 56 seconds left to get Dallas back within two points.

Jason Terry and Nowitzki both missed threes in the final 10 seconds. Terry finished with 27 points and four threes.

Harris' free throws provided Utah's final points, before West hit a three that was too little too late.

"Big plays and big shots on both ends of the floor, the crowd was into it, so you couldn't ask for a better game," said Nowitzki, who added nine rebounds and six assists. "We had our chances. If we get one rebound at the end of regulation the game is over."