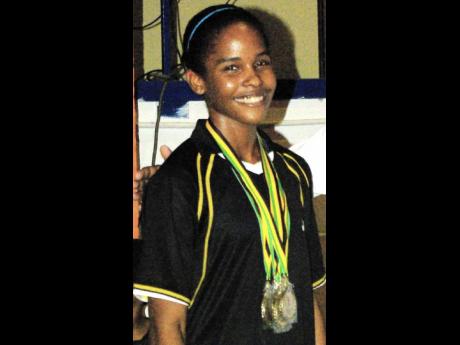 Wynter won the triple in the girls' Under-19 section and singles and doubles events in the Under-17 section, defeating another Under 17 player, Christina Petri 21-11, 21-4 to take the Under-19 singles. She teamed with Petri to defeat Esther Reynolds and Demetra Mew 21-8, 21-15 in the U-19 girls doubles, before joining Jamari Rose to win the Under-19 mixed doubles by beating Romone Robinson and Diamond Cassanova 21-13, 21-12.

However, Ricketts was not to be denied as he returned to capture three titles. He teamed with Sean Wilson to beat Rose and Adrian Lee 21-16, 24-22 to win the Under-19 boys doubles title, and also took the Under-17 singles and doubles trophies.

Three other players also recorded triple feats during last weekend's championships. They are Shane Wilson in the boy's Under-15 section, Taina Daley and Demetri in the girls and boys' Under-13 categories, respectively.

Wilson won the Under-15 singles title ahead of Matthew Lee. He afterwards teamed with Dejon Wright to beat Shamar Hunter and Alton Fogo to win the doubles title. Wilson won his third trophy when he partnered Alana Bailey to take the mixed doubles trophy.