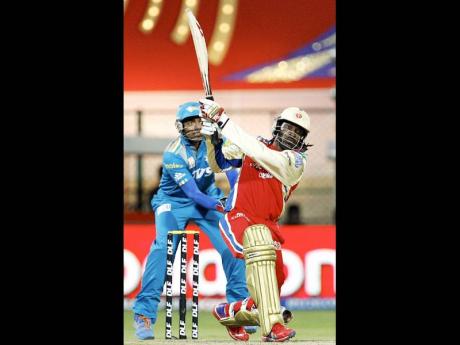 Estranged West Indies batsman Chris Gayle smashed five sixes in one over as Royal Challengers Bangalore (RCB) pulled off a sensational six-wicket victory off the last ball against a resilient Pune Warriors in the Indian Premier League (IPL) yesterday.

The left-handed Gayle, who has not played for West Indies in over a year because of an impasse with the West Indies Cricket Board, lashed a top score of 81 off 48 balls to set up Royal Challengers' second win after three successive losses.

Chasing an imposing target of 183 runs in an exciting encounter that went down to the wire, young batsman Saurabh Tiwary (36 not out) hit left-arm pacer Ashish Nehra of Warriors for a six over long on off the last ball of the innings to see Royal Challengers home.

Tiwary, who hit two sixes and a four in his 25-ball knock, and South African AB De Villiers, who made a breezy 33 off 14 balls with three sixes and two fours, combined for a crucial, unbroken 59-run fifth-wicket partnership.

With 21 runs needed from the last over, Tiwary took a single off the first ball and De Villiers hit Nehra for a four and followed it with two huge sixes to reverse the equation in Challengers' favour.

De Villiers managed just one off the fifth ball, leaving three runs off the final ball, which Tiwary promptly deposited over the fence at the M Chinnaswamy Stadium.

It was Gayle's explosive innings, however, that set the stage for Royal Challengers.

He emerged from an uncustomary quiet start to hit a record eight sixes and four fours, with five of the sixes coming in the 13th over by Warriors' Rahul Sharma.

The Jamaican fell in the 16th over, yorked by Nehra, after hitting the previous delivery over long off for the last of his sixes.

Warriors had earlier tallied 182 for six after opting to bat first, with openers Robin Uthappa and Jesse Ryder putting up a 63-run first-wicket partnership in seven overs.

Uthappa top-scored with a breezy 69 of 45 balls with nine fours and two sixes, while Ryder hit 34 off 22 balls.

West Indies batsman Marlon Samuels scored 34 from 20 balls and put on 47 for the fourth wicket with Steve Smith, who got 16.