Fisherfolk urged to mark their pots 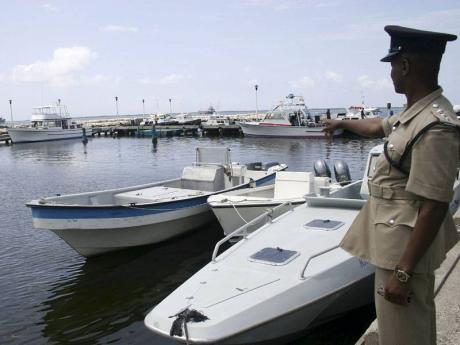 Deputy Superintendent of Police Oral Harrison talks about safety at sea at the marine police base on Port Royal Street, Kingston.

PRAEDIAL LARCENY at sea goes largely unreported, the result mainly of the difficulty in proving the theft. That's the view of deputy Superintendent of Police (DSP) Oral Harrison, second in command of the marine division of the Jamaica Constabulary Force.

"Detection is very difficult and we feel that it is being under-reported, because of the difficulty with which you can actually build a case around it. So the victims sometimes don't really report the matter, but you will get it anecdotal on the cays or on the beaches. However, in terms of coming forward and making a formal report, I think that is very, very limited, it's under-reported, to say the least," he told Agro Gleaner.

In fact, DSP Harrison could only recall one case, quite some time ago, in which a report was made and the accused held, charged and convicted.

A fisherman was on the way to draw his pots when he saw an individual pulling up one and gave chase. The thief headed for shore and, upon his return, the owner made a report to the police who took statements and made an arrest.

Cases such as these are "few and far between" the senior policeman said. In its outreach programme, the marine division has been encouraging fisherfolk to use simple measures to reduce the incidence of theft and to make it easier for the police to help them when it happens.

He explained: "I can tell you, we are saying to the fisherfolk, develop a method to mark your trap ... very, very visible or not, whatever method you choose. Develop a strategy to mark your equipment so it is easily identifiable."

The Agricultural Produce Act was amended to include marine produce such as fish, conch and lobster. In the fish pot where the fish is trapped and now becomes someone's property, once it is removed by another person without the owner's consent, then the offence of larceny would have been committed. The same would apply where fish is removed from the pond of someone who does inland fishing.