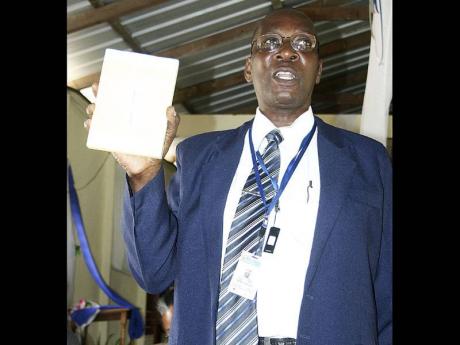 THE MAN spearheading the national campaign to reduce and eventually stop praedial larceny has called into question the effectiveness of the men and women charged with carrying out that mandate. Reginald Grant, praedial larceny prevention coordinator, contends that the Island Special Constabulary Force (ISCF) is ill-equipped to handle the demands of tracking, investigating and bringing to justice those persons who continue to steal farm produce.

He told a recent meeting of the Bushy Park community development committee that the decision by the Government in 2006 to put the ISCF in charge of curbing farm theft had proven to be an error in judgement.

"In hindsight, it is a mistake, because the ISCF has too much on its plate and is not able to serve us - the farmers - in the way that we would want to be (served)," he said at an emergency meeting called to address the growing incidents of farm produce theft affecting some 11 communities in Old Harbour, St Catherine. He insisted, "The Government said it would be better to give the ISCF the praedial larceny programme to manage rather than employ agricultural wardens and, in hindsight, it is a mistake."

Also in attendance at the meeting were Mevral Smith, deputy superintendent of police in the Jamaica Constabulary Force with responsibility for the area, commanders Christopher Murdock and Eileen McKenzie of the ISCF. Grant, a retired assistant commissioner of police, urged farmers to demand more from the police.

"I don't see any reason why Ms Mac and Mr Smith can't designate a person from the Old Harbour (Police Station) to take all complaints, so you know once there is a complaint, call this man. It is not an unreasonable request and it is something that must be pursued until you get a name," Grant insisted.

Grant later told The Gleaner that some of the resources allocated to the ISCF to be used specifically for the fight against farm theft had been diverted. He pointed to the estimated 60 trail motorbikes which had been earmarked for this purpose but had been used instead in traffic control.

The praedial larceny prevention coordinator's remarks came just over a week after Police Commissioner Owen Ellington commended the ISCF for the excellent job it was doing in combating praedial larceny in St Thomas.

He added that 14 persons had been arrested and charged since the ISCF revved up its anti-praedial larceny drive last year, with 13 persons brought before the court for possession of agricultural produce without a receipt.

For the period February to October 2006, it carried out 42 early-morning operations in Kingston and St Andrew, during which 203 vehicles were stopped and a total of 367 farmers and vendors in possession of agricultural produce intercepted. Of this amount, 159 were registered farmers, but only 82 had receipt books, while 66 vendors had the required receipt book and another 60 were either unregistered or had no receipt.

The figures for St Thomas over this period suggested a much greater level of compliance, as 90 per cent of the 93 trucks stopped with persons carrying farm produce had receipts. Of the 128 farms visited in the parish, 97 farmers were registered, 10 were awaiting verification, with a mere 21 not registered.

In St Ann where 86 farms were visited during this period, police officers were required to sign registers as one way of ensuring that they were in fact servicing the target community.