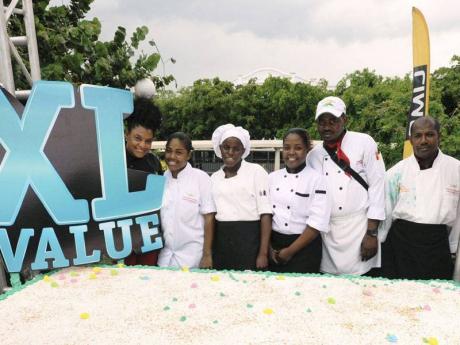 The 'From Thought to Finish' team - (from left) Jacqui Tyson, Kristian Bhalai, Jaunell Bennett, Latoy Ford, Royan Soley and Oliver Wilmot - were the masterminds behind the sweet creation. - Contributed 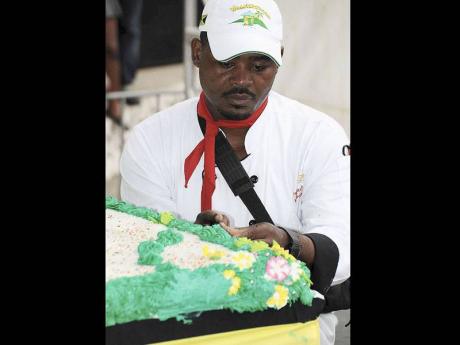 Pastry chef Royan Soley puts final touches on the cake before the event.
1
2

Several pounds of butter, sugar, dozens of eggs, plus hours of assembly, piping and decoration are only a few of the elements that go into the making of the giant 8x8-foot cake prepared for the launch of telecommunications company LIME's XL Value launch held on Friday, April 13.

"The concept for the event made it obvious that everything had to be extra large," says Grace Silvera, LIME's regional vice-president for marketing and corporate communications, who pointed out that the LIME XL Value campaign was the largest of its kind ever offered by the company.

"An offer of this nature which includes free talk time, texts and credit, deserved a grand celebration that all could share, and so this massive delight fits the bill," she added.

Not a job for an ordinary patissier, LIME contacted From Thought to Finish proprietor Jacqui Tyson, who designed and coordinated the logistics for the mega treat.

"This is certainly the largest cake I have prepared locally, and most definitely the largest I have ever seen in Jamaica," says Tyson, who reveals that it took a team of five bakers and decorators, led by her, to complete the project.

"We also had to assemble and ice the cake on location at the Sir William Grant Park, because there is no vehicle large enough to transport something that size safely," she adds.

While the assembly of the sweet treat began early Friday morning, it took some two days to complete the entire process in time for the event which included stilt walkers, dancers and a bumper crowd.

A crew of over 25, including chefs, waiters and LIME employees, worked tirelessly to serve the delight to the over 1,500 persons who gathered at the park to witness the spectacle.

"I would do it again, but make it even bigger next time. I would also add more layers," laughs Tyson.

"The reaction from the crowd to the size of the cake was awesome, and it was nice to be able to share our LIME hospitality with them," Silvera adds.