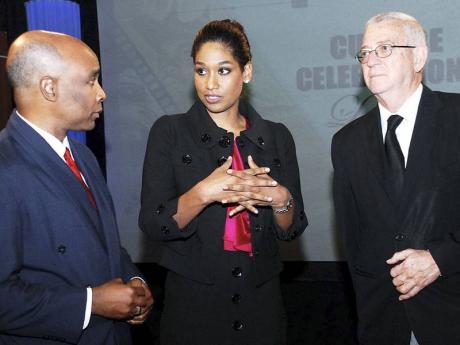 The Honourable Lisa Hanna (centre), minister of youth and culture, chats with the chairman of the board of the Creative Production and Training Centre, Christopher Samuda, while Minister of Education Ronald Thwaites listens in. The three were at the CPTC's cultural celebrations launch at the Wycliffe Bennett Studio. - Colin Hamilton/Freelance Photographer

The Creative Production and Training Centre (CPTC) kicked off its Jamaica 50 festivities at its culture celebrations launch on Tuesday.

The event was held at the Wycliffe Bennett Studio and was in honour of Jamaica's 50th anniversary and CPTC's contribution to preserving the country's cultural heritage.

Chairman of the board of directors of CPTC, Christopher Samuda, welcomed attendees to the event and lauded CPTC for giving Jamaica a revealing self-portrait of its cultural heritage. Samuda also recognised Jamaica's growth as an independent people after centuries of colonial rule.

In her address, Lisa Hanna, minister of youth and culture, said she was pleased, privileged and humbled to launch and celebrate Jamaica 50 along with the CPTC.

She also noted that Jamaica was on a mission to recapture and highlight its culture.

Hanna also praised CPTC for the critical role it played in solidifying Jamaica's heritage in the hearts and minds of the Jamaican people.

Among the highlights of the event were new programmes the CPTC is to implement along with projects still in the pipeline.

One such project is the Marcus Garvey drama series for schools to be launched in 2013. Minister Hanna stated that CPTC "understands the vision of the Government to have Marcus Garvey taught in ways in which people will embrace".

CEO of CPTC, Chantal Hylton-Tonnes, noted that since being founded in 1984, CPTC had been recording and archiving over 1,000 hours of Jamaican culture. She noted that these 1,000 hours took the form of interviews, documentaries, etc.

She made it known that the institution was visited regularly by fans of 'brand Jamaica' in order to access their archives.

Hylton-Tonnes also said that the CPTC was going public with the culture celebrations launch because it needed to diversify the range of cultural programmes, and also because they have expanded access of programmes to not only Jamaica but to the world. According to her, "As part of our mandate to produce, record and archive Jamaica's cultural expressions, the CPTC thought it important to launch new programmes and cultural events to be featured in Jamaica and around the world."

Hanna said CPTC had the Government's support because it was the right thing to do.