Of tradition and flag foul-up 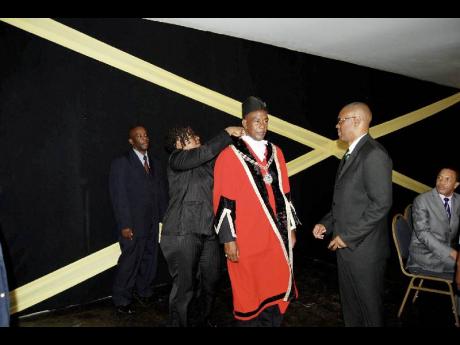 Incoming mayor of Montego Bay, Glendon Harris, is robed at the installation ceremony which has become infamous for the 'desecration' of the Jamaican flag in the background. To Harris' left is the outgoing mayor, Charles Sinclair. - File 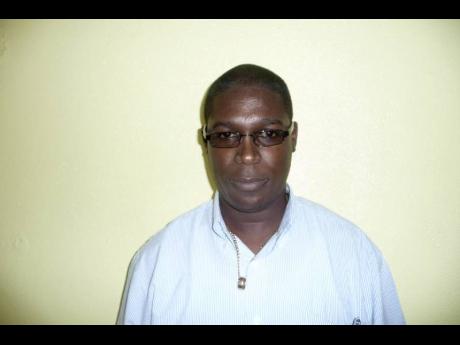 If tradition had been followed, the flag foul-up fiasco stemming from the recent swearing-in ceremony for Montego Bay's new mayor, Glendon Harris, would have never happened.

"The parish council has red and blue as its official colours, and had tradition been followed, those colours would have been the colours used for the backdrop," a St James Parish Council (StJPC) source told The Gleaner yesterday.

"Had tradition not been abandoned, we would not have had this problem."

Based on the interactions he had with Courtney Hume prior to and during the swearing-in-ceremony, former Montego Bay Mayor Charles Sinclair said Hume was definitely the man running the show.

"He (Hume) was the man who asked me to robe the incoming mayor (Harris)," said Sinclair. "On the day of the ceremony, it was he who instructed me where to sit and outlined to me the procedure to robe the new mayor."

However, with the People's National Party (PNP) government declaring that Hume - who was allegedly introduced to Sinclair as a protocol officer assigned to the Office of Prime Minister (West) - occupied no such position and was not authorised to represent the Government at the event, Sinclair said he has been left perplexed.

"What would have caused a secretary/manager of the experience and competence of Winston Palmer to be convinced of Hume's bona fide to yield control of the organising of the event?" Sinclair questioned.

However, while The Gleaner has managed to locate him and has offered him an opportunity to give his side of the story, Hume has flatly refused to discuss the matter, declaring that he would be going against the instructions of his lawyers.

"That is something I am not prepared to discuss ... . My lawyer has given me certain instructions and I am following them," Hume said.

Hume was placed at the heart of the controversy on Monday when the decorator, who put together the backdrop which ended up without the colour green, fingered him as the man who prevented the colour green being added to the backdrop. Green is the official colour of the Jamaica Labour Party.

"I was instructed by a Mr Courtney Hume, protocol officer of the Office of the Prime Minister Western, to forego the completion of the green in the interest of time to which I complied," the decorator, Denton Edwards, had said in a statement to the media.