' I want to be judged as Portia' 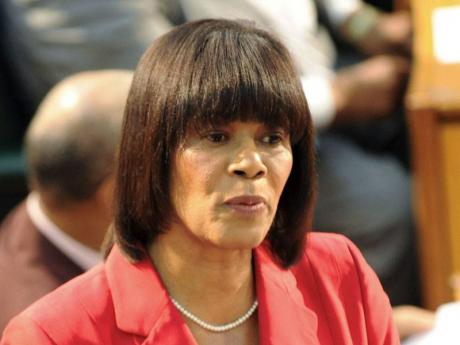 Bristling at criticisms for her silence on the flag foul-up controversy, Prime Minister Portia Simpson Miller says she has her own leadership style and does not want to be judged by the standards of her predecessors.

Defending her administration's handling of the controversy, Simpson Miller revealed that shortly after it was brought to her attention, she gave instructions, while attending the Summit of the Americas in Colombia, for a statement to be issued and this was done.

"I do not name ministers of government to be silent, to sit back and not perform their tasks and I keep on doing everything and speaking about everything," she told reporters yesterday after breaking ground for the Hellshire Phase Four housing development.

"I have my own leadership style. I want to be judged as Portia, not as any other person," Simpson Miller insisted.

The controversy unfolded after the colour green was omitted from a replica of the Jamaican flag that was mounted as a backdrop at the swearing-in ceremony for newly elected Mayor of Montego Bay Glendon Harris.

The foul-up drew widespread criticisms from the Government, the Opposition and several civic groups about the disrespect for the country's national symbols.

Amid claims by Harris and counterclaims by the private contractor as to what caused the omission, Minister of Local Government Noel Arscott issued a statement on the weekend saying he has ordered a full investigation and will "allow the chips to fall where they may".

Already, Courtney Hume, the man who allegedly instructed that the green be omitted, has resigned as special adviser to Sharon Ffolkes-Abrahams, the junior minister for industry, investment and commerce.

"Our investigations have revealed that his involvement in organising the function, whether he instructed the decorator or not, was not authorised," Arscott said in a statement released on the weekend announcing that Hume's resignation took immediate effect.

Opposition Leader Andrew Holness, speaking during a press conference on Monday, criticised Simpson Miller for not addressing the issue and demanded a statement from her.

Without singling out Holness, the prime minister responded to the ctiticisms saying she believed in team-building and working together and she expected members of the team to perform.

Added Simpson Miller: "Don't expect that you are going to hear me speaking on every issue while I have ministers of government holding down the various portfolios."