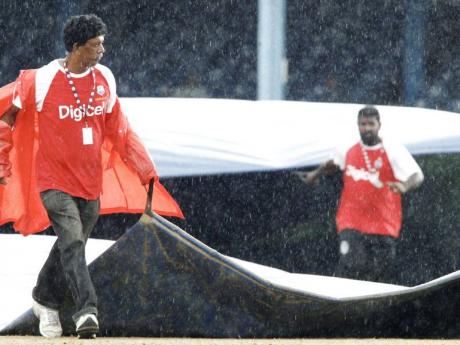 Workers cover the field after the fourth day of the second cricket Test match between Australia and West Indies was suspended because of rain at the Queen's Park Oval in Port-of-Spain, Trinidad, yesterday. - AP

An outstanding spell from speedster Kemar Roach was the brightest spot as rain wrecked the fourth day of the second Test between West Indies and Australia here yesterday, allowing just 30.4 overs at Queen's Park Oval.

Roach claimed three for 27 in a penetrative 10-over spell, leaving Australia to battle to 73 for three when the adverse weather halted play 65 minutes before tea.

Experienced right-hander Ricky Ponting was unbeaten on 32 and was partnered by captain Michael Clarke on one.

The rain, which has plagued the contest over the last three days, continued into the evening, forcing match officials to eventually abandon the play for day just after 4 p.m.

It was a disappointing end to a day that promised so much after Australia snatched a 54-run lead at the start, by bowling West Indies out for 257.

The hosts added just five to their overnight 252 for nine before Carlton Baugh was lbw for 21, sweeping at the fourth ball of the day from left-arm spinner Michael Beer.

Warner, who faced 31 balls and struck three fours, grew in confidence and gathered two fours in one over from Edwards with a glance through midwicket and a drive through cover.

However, he fell to the second ball of Roach's first over, edging to first slip where Darren Bravo pouched a low catch.

Rain arrived 45 minutes before the scheduled lunch interval forcing an early break, but Cowan and Ponting led the Aussies fightback on resumption, extending their third-wicket partnership to 31.

Roach continued his impressive spell, however, trapping Cowan lbw at 57 for three, to set the Aussies back again.

Cowan, dropped at slip by captain Darren Sammy off Edwards before he had scored, faced 78 balls and struck two fours.

Ponting was playing fluently with two fours off 57 balls when the rains arrived again, this time curtailing play for the day with the Aussies 127 runs ahead.