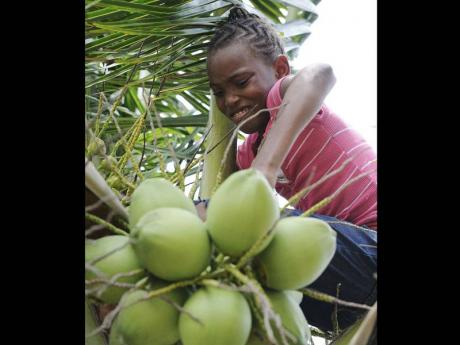 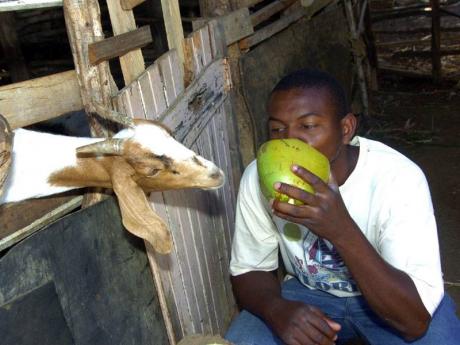 A goat appears to beg some coconut water from a farmer in Santa Cruz, St Elizabeth. Marketers have dubbed it 'nature's sports drink' and 'life enhancer'. - File
1
2

A cottage industry has sprung up around the bottling of coconut water, evidenced by the emergence of a number of labels in grocery stores, but the bottlers of the product have largely been unable to solve the issue of a standardised product, packaging, and lengthening the shelf life of the highly perishable drink.

The sector is comprised largely of small and micro operations, with the notable exception of multibillion-dollar conglomerate Grace-Kennedy Limited, which puts out a canned pulp-filled variety under the Grace label.

But even the Grace product, as tasted by Financial Gleaner in different tests, varies in levels of sweetness and freshness.

The coconut water market has been expanding over the past four years. The Bureau of Standards Jamaica (BSJ) is the best source of the number of players in the market, because it has to approve each product, but the information was unforthcoming from the agency.

Michael Ranglin, the CEO of GK Foods, says he has seen a lot of new brands on the shelves within the period, most of whom he observes to be small players.

"You can tell that they are small by the appearance of the packaging. The newer players use simple bottles, very simple shapes. After they have been in the business for some time, you see more sophistication in their bottling," he said.

Coconut water is bottled as a chilled product, requiring freezer storage to extend its shelf life. Grace is the exception: the canned product is a non-chilled variety found alongside other bottled drinks and syrups on grocery shelves.

It is also an imported product that is bottled for GraceKennedy in Thailand, Ranglin said. GraceKennedy is also involved in the industry at a different level: it sells different brands through its supermarket chain Hi-Lo Food Stores.

The lure of coconut water is its anecdotal health benefits. It is low in calories, and is a good source of potassium and other essential vitamins and minerals. Coconut is also packed with electrolytes and is fat free.

In rural areas, it is consumed not only as a refreshing drink, but one that is good for heart health by flushing out impurities - or in rural parlance, it 'washes off your heart'.

The product is bottled without additives.

Ranglin said the small players have managed to maintain longevity, as he is not seeing evidence of bottlers exiting the industry. However, he said the supply of some brands is inconsistent.

"The presence of the brands on particular supermarket shelves will depend on how the product behaves on the shelf and consumer feedback and price. Consistency, price and reliability of the supplier and how the supplier responds to issues that may arise determine presence on the shelves of supermarkets," said Ranglin.

The coconut water industry operates as a "free market", said Yvonne Burns, general manager of the Coconut Industry Board.

Burns said the players "do as they please", indicating that there is little regulation of bottlers.

The market is "a free for all", a "do as they wish thing", Burns said, in response to questions about the structure of the coconut industry, market size, players and product research.

"We should have that information, but we don't," she said.

The Coconut Board is state regulator of the coconut industry. As such, bottlers are supposed to seek approval for their operations and report to the board on a monthly basis, "but they don't do that," Burns said.

"Remember, it is a free market, but the BSJ should have a list of all the players," she said.

Promised response from BSJ spokesman Ellis Laing requesting information on players in the market were unforthcoming. The public relations department directed queries to Fay Bailey, who also did not respond.

The taste of coconut water/juices will vary, depending on the age of the coconut it comes from.

Mark Wiggan, producer of the brand Circle B Coconut Water, said he was aware of the requirement to seek approval for their operations and report to the Coconut Board, but he has opted not to do so.

"They don't ask for it, so we don't give them any report," he told the Financial Gleaner this week.

Wiggan, who operates in St Andrew, argued that the Coconut Board was a competitor and apparently has omitted to collect data on the bottlers "so we just don't give them".

He said that although the board was also responsible for technical support, he has not seen or heard anything being done to control the lethal yellowing disease affecting the industry.

GraceKennedy's Ranglin also points out that packaging of the product impacts the shelf life.

In order to maximise on the seven to 10-day shelf life of chilled coconut water, which are packaged in clear plastic bottles, the product needs to be stored between 0 and 4 degrees Celsius or just below freezing temperature.

Packaging of the same product in cans can last as long as two years.

"We presently do not do the refrigerated or chilled product. We only do the canned ones. That is because we target mainly the overseas market; plus our products are made in Thailand and we take some here to supply the local market," said Ranglin.

Ranglin added that "no unique procedure is required for entry in this industry. Entrants need only demonstrate to the BSJ that the product is fit for human consumption and get the certification from the Ministry of Industry, Investment and Commerce."

However, Ranglin said the dominance of the coconut water market by SMEs is a good thing.

SMEs, he said, "are very important to the country and we would love to see lots more of them."

The report also said that majority of local coconut farms was smaller than 10 hectares, pointing out that "coconut is essentially a small holder's crop".