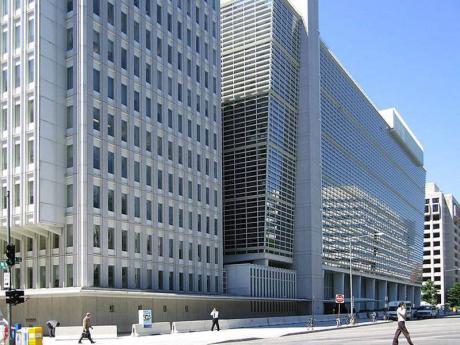 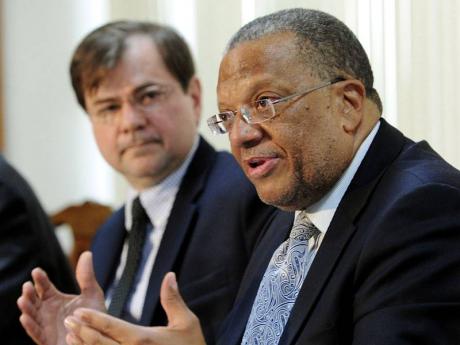 Luis Breuer (left), International Monetary Fund mission chief, looks on as Minister of Finance,Planning and the Public Service Dr Peter Phillips addresses the media during a joint press conference between the Government and the fund in Kingston in this January 2012 file photo.
1
2

The World Bank this month described as 'moderately satisfactory' Jamaica's fiscal reform process while noting that it expects the country's tax collections score to improve to grade level B.

The December general election and change of administration slowed down the reform process, the World Bank said in an assessment of a US$100-million loan programme to Jamaica, which closed last month.

"The Government of Jamaica continues to demonstrate strong commitment to the critical public-sector reforms. The Government has made progress in implementation of most reforms, albeit at a slower than expected pace, mostly due to the Parliamentary elections being called early and the subsequent change in Government," stated the bank in the five-page document titled, Implementation Status & Results Jamaica, published in April.

Last September, the World Bank board of directors approved a US$100-million loan for Jamaica to support the Government's fiscal reform and debt sustainability programme.

The World Bank adjusted its previous assessment from 'satisfactory' to 'moderately satisfactory' following its most recent visit by officials, from February 23-March 2, the document noted.

"However, the most recent supervision mission identified gaps in progress towards results in a number of areas, particularly the winding up of inactive public bodies, reducing the public-sector wage bill, and implementation of the new methodology for evaluating investment projects. The mission team highlighted these areas to the authorities, who confirmed their commitment to address these areas and advance the overall reform programme," said the World Bank assessment.

The World Bank noted in the loan assessment that the island scored a D+ in fiscal year 2007-08 in regard to public expenditure and financial accountability and tax collections. It added that the programme target is a rating of 'B' in FY2011-12.

"There has been no new public expenditure and financial accountability since 2007-08. However, Jamaica is implementing a comprehensive reform of its tax administration. In May 2012, the Tax Administration Jamaica will become a semiautonomous authority. Also, the number of one-stop shop service centres increased from four to seven," the bank stated.

The policies supported by the World Bank are complemented by the 27-month International Monetary Fund standby arrangement approved in February 2010 in the amount of US$1.27 billion, as well as by budgetary support from the Caribbean Development Bank, the European Union and the Inter-American Development Bank.