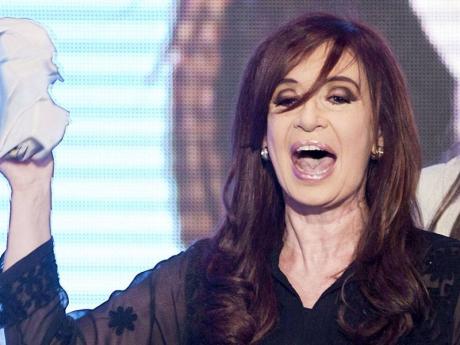 President Cristina Fernandez de Kirchner dropped a bombshell on Monday, with the nationalisation of YPF.

Last week, the government played down the notion of taking over the oil giant, but she came back with a different idea after the Summit of the Americas. It seems that things did not go so well in Cartagena. She definitely left in a huff, before the close of the conference.

A private meeting with President Barack Obama ended in acrimony, when he refused to take her view on the Malvinas. To make matters worse, the President referred to the islands as the Maldives-underscoring the perception that the US has no interest in the issue.

There were also some veiled threats to kick Argentina out of the G-20 and even suspend its membership in the IMF for its senseless trade policies and manipulation of macroeconomic statistics.

Therefore, it was no surprise to see her fury the next day when she decided to nationalise YPF. The decision further isolates Argentina from the rest of the world. A full pariah, it is no longer a member of the emerging markets club. It is a frontier market, with little regard for the rule of law, property rights and prudent macroeconomic policies. Moreover, it is a renegade country with a bent for expropriation. It is for these reasons that investors are heading for the door.

After scalping bondholders, breaking almost all of the privatisation contracts, taking over the private pension-fund system and now seizing the national oil company, it is hard to take Argentina seriously.

Particularly, since there is a good chance that the Argentine government will, to a large extent, expropriate YPF. Her declarations on Monday questioned the value of the company, and she said that the government would conduct an extensive audit to establish a more accurate valuation.

While many of her moves are straight out of President Hugo Chávez's Bolivarian playbook, at least he paid top dollar for the assets he seized. Of course, Venezuela is one of the largest oil producers in the world, and the government had sufficient funds to pay for the companies it nationalised.

Argentina is not in the same situation. On the contrary, international reserves are on the decline, and the Ministry of the Economy was toying with the idea of returning to the capital markets this year to help it meet some of its obligations.

However, it can kiss this idea goodbye. It can also forget about attracting foreign investment for some time. This will leave many provinces in the lurch. The international capital markets was a big source of funding for several of the larger provinces. It will also lead to more capital flight, as investors, households and corporates flee for safety. All of this bodes poorly for the sovereign and corporate sector.

Of course, the Kirchners faced similar warnings in the past, when they undertook highly unorthodox policies. However, nothing bad ever happened. Investors eventually forgot, and the country continued to grow.

Moreover, the Kirchners are very lucky people. A slew of positive shocks, such as the re-emergence of China, the surge in grain prices and the acceleration of the Brazilian economy helped mitigate many of their blunders.

President Fernandez de Kirchner also thinks that she has another rabbit that she can pull out of her hat. The discovery of 22.8 billion barrels of shale oil and gas in the Vaca Muerta field may catapult Argentina into the big leagues. This may be the reason why the Argentine president felt so empowered that she could storm out of the summit in Cartagena.

However, she still needs to find the billions of dollars needed to develop the new fields, and her recent actions will not help attract foreign investment. She is also putting Axel Kicillof, a flaming red Marxist, along with Julio De Vido, a political hack, in charge of the newly nationalised company.

It's true that the Spanish did not run YPF optimally, but the new management team will surely run the operations into the ground. The decision to place the 42-year-old academic at the head of YPF also showed the growing clout of her son.

Kicillof is one of the most senior members of La Campora, the political youth organisation that was established by Maximo Kirchner. In the same way that Kim Il-Sung established a long line of well-fed successors to carry on with the country's leadership, the Kirchners are taking steps to keep their DNA in power for a long time to come.

The problem is that Korea is not the best country to emulate. Neither is Russia, another country with similar kleptomaniac tendencies. However, Argentina is anxious to join their club, now that they feel as if they wore out their welcome in the association of well-behaved civilized nations.