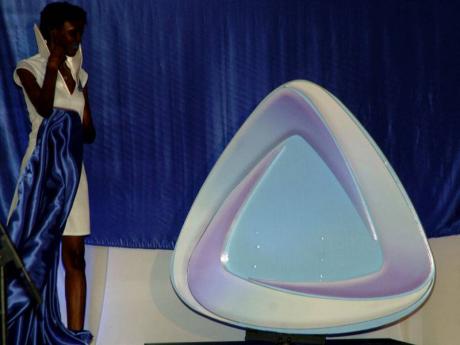 A life-sized version of the new GlaxoSmithKline product, Panadol Advance, is unveiled at the launch at the Hilton Kingston hotel in this June 17, 2010 file photo.

Rockville, Maryland-based Human Genome Sciences said Thursday the offer undervalues the company and that it would explore other options, which could include a potential sale of the company. It invited GlaxoSmithKline to participate in its exploratory process.

GlaxoSmithKline offered $13 per share, which is an 81 percent premium to Human Genome's closing price on Wednesday of $7.17 per share. Human Genome currently has about 199.1 million outstanding shares, according to FactSet.

Glaxo CEO Andrew Witty said he was disappointed with the offer's rejection.

"We believe there is clear strategic and financial logic to this combination for both companies and our respective shareholders - and that now is the appropriate time in the evolution of our relationship for our two companies to combine," Witty said in a statement. Glaxo said a combination of the two companies would help the company save $200 million in expenses by 2015.

Analysts have speculated for months that Glaxo might try to buy its partner.

Shares of Human Genome Sciences nearly doubled, rising $7 to close at $14.17, while GlaxoSmithKline's US stock added 32 cents to close at $46.69.

Glaxo and Human Genome Sciences currently split sales of the injectable biotech drug Benlysta, which made headlines last year as the first new drug approved for lupus in 50 years. Sales have been underwhelming since the drug launched in March, with monthly revenue averaging $11 million. Still, some analysts believe the drug could eventually grow into a billion-dollar blockbuster in coming years due to its large market and price tag. More than 200,000 US lupus patients could benefit from the drug, which costs $35,000 per year.

Lupus causes fibrous tissue and inflammation of internal organs, skin rashes and joint pain. Most of Benlysta's benefit comes from relieving muscle inflammation rather than treating the underlying disease.

Analysts said Thursday they are skeptical any other drugmakers will be interested in acquiring Human Genome Sciences.

"Given the anemic launch of Benlysta for lupus, we are not convinced another buyer outside of GSK will come forth," said Barclay's analyst Ying Huang. "Benlysta, despite being the first drug approved for lupus in over 50 years, has struggled with its growth trajectory."