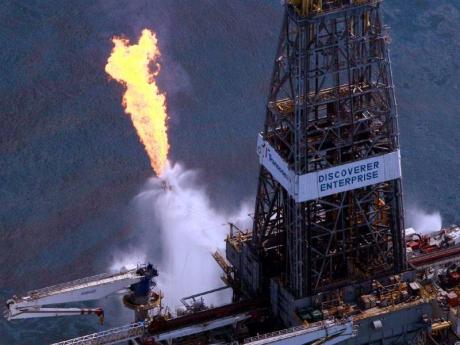 In this June 13, 2010 file photo, the Transocean deepwater Discoverer drilling rig operates over the site of the deepwater Horizon oil spill in the Gulf of Mexico.

First, it was natural gas. Now a rush to tap new oil wells in North America is creating bigger profits for Halliburton.

The Houston company, which provides a variety of services for the petroleum industry, said Wednesday that earnings jumped 22.7 per cent in the first three months of the year.

Petroleum companies aggressively pushed this year to find new oil fields in the US, shutting down natural gas rigs in the process. The reason is simple: oil prices rose while natural gas prices dropped sharply. In the first quarter, benchmark US crude increased nine per cent and natural gas plunged 40 per cent to a 10-year low.

The switch to oil drilling helped Halliburton even as it reduced earnings from the company's natural gas business. Oil production is a more intensive process than natural gas, which means Halliburton can charge higher rates for its services and reap bigger profits.

"This shift is very positive for us," Halliburton CEO Dave Lesar said in a conference call with investors.

Halliburton led off the first-quarter earnings season for the oil sector. Rival Schlumberger Ltd, the world's largest oil-services company by market value, will report its first-quarter results on Friday. Baker Hughes Inc will report next week, along with oil majors Exxon Mobil and Chevron.

Service companies are paid to help the petroleum industry find new wells and get them ready for production. Halliburton is considered the industry leader in a technology called hydraulic fracturing, or fracking, that allows drillers to crack open underground shale layers that contain oil and gas. That technology helped create a boom in natural gas production in the US.

Halliburton's results include a $300-million charge related to its role in the 2010 Gulf of Mexico oil spill. The company had provided cementing services for BP Plc on the well that suffered the disastrous blowout. While it continues to spar with BP over who should take responsibility for the disaster, Halliburton said it needs to set aside funds for "probable losses" from future lawsuits and settlements.

BP expects to pay more than $37 billion to cover damages and other costs, and it says Halliburton should pay a share of that. BP has collected several billion dollars from minority owners and other contractors associated with the well. Halliburton maintains that BP, as the well's owner, is responsible for causing the worst offshore oil spill in US history.

Meanwhile, Halliburton's revenues soared as the petroleum industry swept into the United States in search of access to underground shale.

The number of rigs operating in oil fields increased 12 per cent in the quarter, compared with a 17 per cent drop in natural gas rigs, the company said.