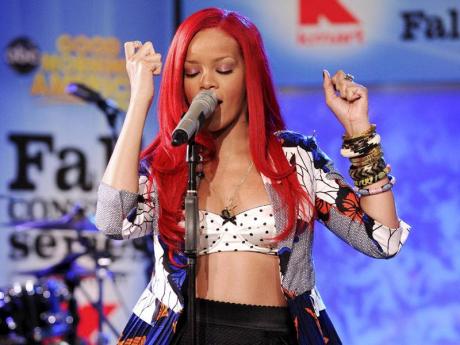 Rihanna has come under fire after posting a picture online of herself with a bag of white powder.

In the snap added to photo-sharing website Instagram, the 24-year-old singer is seen sitting on her bodyguard's shoulders appearing to 'cut up' an unidentified substance on the top of his shaved head.

Taken at last weekend's Coachella Music Festival in California, the image has caused outrage among some web users, attracting more than 1,000 comments, with some speculating the mystery substance was cocaine.

One wrote: "Yep take coke! U gonna die," while another added, "Chick looks like a druggie."

One person even expressed fears the star could be heading the same way as the late Whitney Houston.

The fan wrote: "I love her music, not her lifestyle. Hope she gets this under control before we have her funeral on TV like Whitney Houston."

A parent of one of her younger followers added: "I have a 10-year-old daughter who loves her, and I wouldn't want my child seeing this."

Rihanna has previously insisted she does not want to be a role model for anybody, and recently updated her twitter page with the posting: "I'm crazy, and I don't pretend to be anything else."