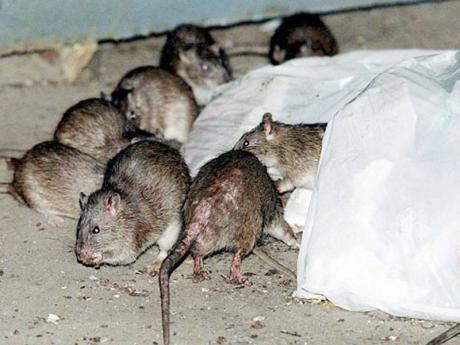 Dangerous, disease-carrying rats are running free in nearly all sections of Kingston and St Andrew and the infestation ranges from moderate to very heavy in a majority of 120 communities surveyed.

During a meeting of the Kingston and St Andrew Corporation's (KSAC) parish disaster and public health committee, councillors were yesterday told that about $200 million was required to conduct a massive eradication campaign, the first phase of which began with the survey of the communities.

Dr Sandra Chambers, medical officer for the Kingston and St Andrew Health Department, produced staggering statistics from the findings of the survey carried out by the department between last September and April.

Chambers said the nocturnal creatures are running amok and the improper disposal of residential and commercial garbage are largely to blame. She said the survey included examinations of open lands and derelict buildings.

More than 50 per cent of communities surveyed had a very heavy rodent presence and the Waltham and Hagley Park communities head the list with very heavy infestation.

Fifteen to 49 per cent of the communities were classified as heavy, while 12-15 per cent had moderate presence of the rodents.

Chambers said a pair of rats could lead to 30,000 new vermin in a year as a result of a short gestation period. She noted that the city was in peril from diseases that could result from the carrier rodents.

In the meantime, the main agency responsible for garbage collection in the city - the National Solid Waste Management Authority (NSWMA) - is admitting culpability in contributing to the rodent infestation as a chronic shortage of trucks has only allowed the agency to collect 60 per cent of the city's residential garbage.

The NSWMA representative, Charlie Grant, said the agency has only 35 of the 100 trucks needed to collect garbage in Kingston, St Andrew and St Thomas.

According to him, the agency currently has in that fleet 45 trucks which are external to the body, and even added together, it is still insufficient.

The agency strives for twice-weekly collection but the truck shortage is preventing that on a regular basis. He said contracted trucks often have difficulty climbing some of the steep hills, which leaves many areas with garbage backed up for days.

A significant percentage of the agency's trucks are also in need of repairs.

Kingston Mayor Angela Brown Burke, who is also councillor for the Norman Gardens division, said Labour Day activities in the city would complement the eradication campaign of the Kingston and St Andrew Health Department.

The mayor called on the media to help in the public education campaign to be undertaken.