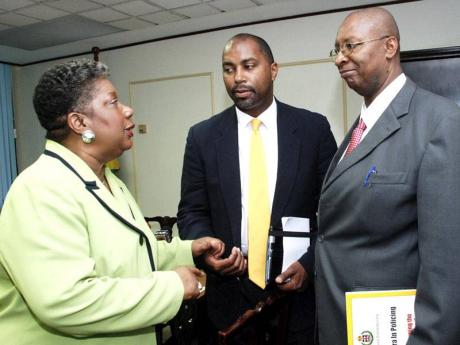 Polygraph testing of Jamaica Constabulary Force (JCF) members is among recommendations that have been put forward to tackle the lotto scam.

The revelation comes from Deputy Commissioner of Police Glenmore Hinds, who yesterday joined Julian Robinson, state minister for science, technology, energy and mining, at a press briefing to highlight the Government's response to the infamous and widespread scam.

Hinds noted that persons from various sectors, including corrupt police personnel, were involved in the scam. He said the JCF was also recommending increased computer security among companies and suggested employers have a system of retrenchment of employees suspected to be participants.

"We have also encouraged the industry players to keep a list of employees who are involved, so they can be blacklisted," he said. He revealed that the remittance services have assisted greatly in terms of making themselves less vulnerable by trying to deter persons from using their facilities. Using a slide presentation, he outlined the JCF's plan to tackle the scammers.

"Level I deals with seeking to stake out remittance services and arrest and search persons who are suspected to be involved in the activity. Level II requires a greater level of investigation, where we focus on document fraud. Level III is the organised crime (unit) doing diligent investigation and level IV is where we work with partner agencies," he said.

Hinds also noted the Anti-Corruption Branch would be looking into state agency corruption in the scheme.

Robinson, in reiterating the Government's commitment to tackle and eradicate the scam, noted the administration was committed on two levels. The first involves embarking on a public-awareness campaign so that individuals are aware of the scam's implications on the wider society.

"Many of the people who assist in the (criminal) process ... do not necessarily view this as hard criminal activity. And part of our public awareness is to highlight that, to indicate to many of these persons that by doing this, you're endangering the job prospects and the economic growth for your own family," he said.

"We are also doing a campaign in the US to sensitise victims; to indicate to US authorities that we are aware of it, that a number of steps ... are taking place and that we have, in fact, a proactive strategy to try and address the problems."