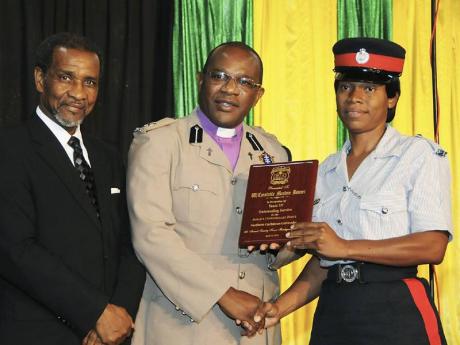 SHE'S THE type of person who loves a challenge, so when she quit her civilian job two years ago at the Ministry of National Security to serve her country as a law enforcement officer, 38-year-old Marlene Bonner had one goal in mind and that was to ensure justice for all and help change the perception people had about the Jamaica Constabulary Force.

"I am determined to make a difference. It pains my heart to listen to residents on television in the nights, crying out for justice, especially those who claim that they have been abused by members of the police force," said Constable Bonner, who is preparing to surrender her life to the Lord very soon.

A single parent and the mother of a 14-year-old daughter who attends a prominent high school in the Corporate Area, Constable Bonner is aspiring to become a top-flight investigator.

Despite her minimal experience and years of service in the JCF, the constable has offered herself as a counsellor and adviser, not only to residents of the jurisdiction in which she serves, but also to the persons whom she has arrested and charged.

"I am very passionate about my work, especially when it comes to investigation," said the rookie officer, who has had 95 per cent convictions in the 54 cases she brought before the court, since June last year.

For this performance, she was voted as the top cop of the quarter, at the patrol division of the May Pen Police Station, Clarendon.

Last week, she was among 19 individuals (17 women and two men) who were recognised by the Northern Caribbean University as 'Models of Excellence in Nation Building'.

"She has been performing exceptionally well. As a young officer, she has taken on some serious challenges. She has a systematic approach to the job," said Senior Superintendent Dayton Henry, who has likened her to retired Superintendent Artice Brown-Getton.

Brown-Getton was rated among the best female investigators and front-line crime fighters during the 1970s to 2004.

"She has the Artice Brown-Getton approach, especially when it comes to investigation. I have never seen her lose her temper. She operates like one of the male officers who is on top of his game," said Henry.