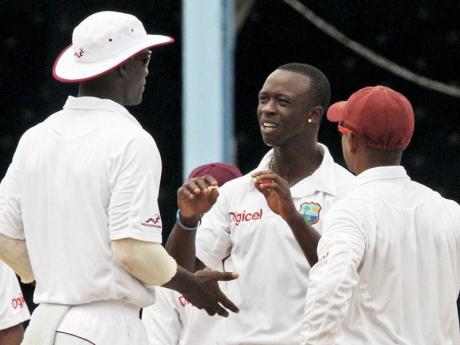 Persistent rain spoiled what could have been an enthralling finish to the second Test between West Indies and Australia here yesterday, forcing a stalemate and leaving the hosts with a must-win scenario in the final Test next week.

Set 215 to win after lunch on the final day, West Indies had taken up the challenge and reached 53 for two when bad light and then rain halted play half-hour before the scheduled tea interval.

The downpour continued for the next hour and a half, rendering a result impossible and leaving match officials to abandon the contest at around 3:40 p.m.

West Indies will now have to beat Australia in the final affair in Dominica in order to square the three-Test series.

Earlier, Australia declared at 160 for eight after fast bowler Kemar Roach bowled superbly to take five for 41 and end the match with a 10-wicket match haul.

Resuming at their overnight position of 73 for three, Australia made slow progress in the first session but accelerated after lunch to make a declaration half-hour into the session.

The left-handed Powell was plumb lbw for four to the 10th ball of the innings to one that straightened before the right-handed Barath nicked an outswinger to skipper Michael Clarke at first slip for five, to leave the Windies on 13 for two in the fourth over.

Captain Darren Sammy, promoted to number three, then counter-attacked and was unbeaten on 30 from just 26 balls when the rains came.

Seeming oblivious to the gravity of the situation, the right-hander brandished his bat audaciously. He collected a pair of boundaries off medium pacer Shane Watson's next over, whipping one off his pads crisply through midwicket before going inside out over cover.

He then plundered 14 runs off Hilfenhaus' fourth over, striking consecutive boundaries through midwicket and then clearing long off with a delightful straight hit.

Bravo, unbeaten on eight at the end, was content to defend but Sammy's fireworks left many wondering what could have been.

Roach had earlier completed his second five-wicket haul of the game to keep the Aussies in check, after they resumed their second innings from their overnight 73 for three.

In the 25 overs possible after the start was delayed by 45 minutes because of a wet outfield, Australia made slow progress, adding just 50 runs as the Windies seamers bowled a disciplined line and length to negate the anticipated acceleration in scoring.

Pacer Fidel Edwards, who bowled superbly but without luck, grabbed the first wicket when Ricky Ponting pulled a short ball to Powell at deep midwicket for 41 with the score on 93.

Fourteen balls later with two runs added, Sammy pouched a brilliant return catch moving to his right, to account for his opposite number Clarke for 15.

Going to lunch at 123 for five, Australia added 37 runs from 6.5 runs afterwards as they worked their way towards a declaration.

However, Roach accounted for left-hander Mike Hussey bowled off the under edge for 24 at 145 for six before comprehensively bowling Hilfenhaus three balls later without scoring, with four runs added.

Wicketkeeper/batsman Matthew Wade was unbeaten on 31 when the declaration came.

Man of the Match: Kemar Roach.