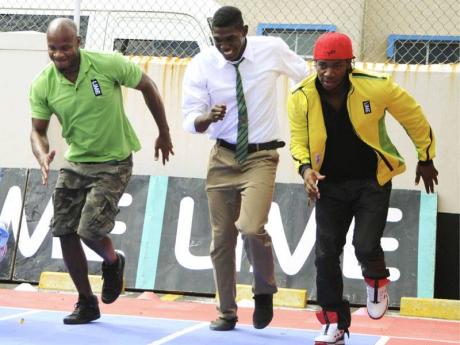 For the 20th year on the trot, LIME has dialled up support for teams heading to next week's Penn Relays at the University of Pennsylvania in Philadelphia, with the communications company providing sponsorship packages valuing a combined $2.3 million to 23 local high schools.

LIME yesterday handed over cheques valued at $100,000 to schools from all across the island. The money will be used to offset the cost to compete at the April 26-29 relay carnival, and has also committed support to Team Jamaica Bickle - an organisation consisting of Jamaicans living overseas, who assist in the transportation and accommodation of the Jamaican teams that compete at the event.

"This is why we are currently the biggest supporter of national track and field with a tremendous deal of emphasis on youth athletics. Over the last three years, we have provided $23 million for the (ISSA/GraceKenendy) Boys and Girls' Championships, $56 million for the Carifta Games, and $21 million towards the JAAA youth programme," Sinclair pointed out. "We invest in sports because we see it as a powerful tool to promote development and essential in facilitating national unity."

LIME will also provide 'Jus Talk' prepaid calling cards to each team, to ensure that everyone will be able to keep in touch with loved ones back home during the event.

The two, who sat side by side; possibly in the same manner that they will be approaching the finish line at the JAAA/Supreme Ventures National Senior Championships in two months' time, shared their Penn Relays experiences with the students present and offered their encouragement.

"You shouldn't be nervous because once the other athletes hear that the schools from Jamaica are at the Penn Relays they are the ones that get nervous; you will feel as if you are in Jamaica because the crowd is basically only Jamaicans," said Powell.

"I ran one of the fastest legs on a 4x400m at Penn Relays over the years," Blake reminisced. "I think nervousness is good because sometimes when you are nervous you perform much better than when you are too relaxed. It's pretty cold there but when you get out there it's a different feeling because most of the Jamaicans in the stands are cheering for you, and that pumps you up and gets you ready ... just go out there and have fun."

Noel Channer, sports master at recipient Kingston College, was grateful for the contribution.

"This will go a far way in helping us to prepare ourselves, the 'old boys' have given us tremendous support but this will add to that amount that we need to clear off our expenses," said Channer, who also advised that airfare for the 21 athletes in his squad will cost over $1 million.

"The cost to go to Penn Relays is very high so the contribution from LIME goes a far way," Brown noted.