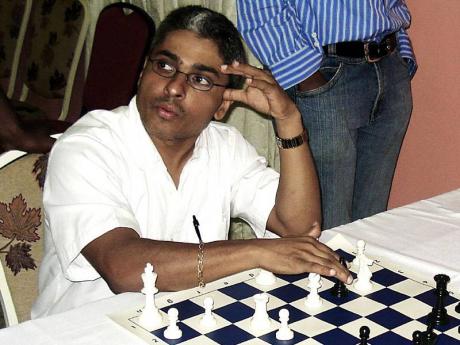 Known affectionately as 'The Magican', many-time champion Fide Master Shane Matthews leads the pack of 24 players in the 44th National Open Chess Championships with a perfect score of three points from three games.

Play continues today after three interesting rounds held at the Spanish Court hotel and the Norman Manley Law School last weekend. The top of the table classic matchup is set for today when FM Matthews squares off against International Master Jomo Pitterson, who has not lost a game and but dropped half a point after an unexpected draw with in-form Carifta junior champion Stuart James.

Other unexpected outcomes included CFM Duane Rowe being held to a draw by WFM Deborah Richards in a game in which the 10-time National Women's Champion WFM Richards was clearly in a superior position and ought to have won in round two. Also, young giant-killer Shreyas Smith continues his dominance of the NMs when he took out defending National Champion Damion Davy in round one, and then in round two took out NM Mikhail Solomon. The big-player slaughter by Smith was halted in round three when he met CFM Rowe. FM Warren Elliot was also held to a draw by Ian Wilkinson, the Jamaica Chess Federation president.

Points standings going into the fourth round of the National Open Chess Championships 2012 later today are:

In the President's Invitational, there is a field of five who will playing a double round robin. Points in that tourney are: Michael Diedrick - 1.5, Alistair Walker - 1, Terrence Lindo - 1, Kevron Campbell - 0.5 and Tewana Mellace - 0.