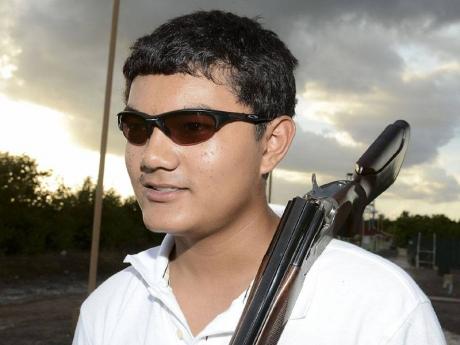 Fresh from his outstanding performance at the Seminole Cup tournament in Florida in late February, 15-year-old Chen beat a field of 32 other shooters on Sunday at the Spring Open tournament, becoming the first junior to claim top spot in that event. This was Chen's first competition win and continues his good run after winning his class at the Florida event.

He shot an 84, tying him with the much more experienced Errol Ziadie. But the 'A' class shooter decided not to contest a shoot-off and conceded to the junior. Chen's feat was magnified by the fact that he went up against former National Sporting Clay Champions Shaun Barnes, Bobby Chung, Ian Banks, Joey Chin, Ziadie, Robert Yap and Craig Simpson.

The fast-talking Chen admitted that he was a a little daunted by the big names around him.

"I didn't go to the shoot expecting to win. But Uncle Khaleel (national coach Khaleel Azan) has been teaching me a new technique, to shoot off the shoulder, helping me see the 'birds' (targets) more clearly," he revealed.

'Off the shoulder' means that rather than having the gun already raised to shoot, you wait until the bird is released from the trap before you raise it. Chen really nailed the competition in the latter half of the shoot, taking out 42 of 44 birds. Azan could not laud his charge enough.

"I'm very pleased with his progress. I'm very proud. It shows me my programme is working," he said. Azan told The Gleaner that they set a difficult course at the Jamaica Skeet Club in Portmore, with mostly international-type targets being shot. Chen admitted he found them challenging.

"These were unique birds. They came at you from different angles and speeds. So you would have a pair that would come at you one high, one low or one fast, one slower," he explained. But he said conditions were good for shooting, only a light breeze offering any hindrance.

"I was confident that day, plus I wanted to try my new technique," said Chen. Only four shooters got over 80 from the tough course, making Chen's victory even more impressive. Azan said he expected his pupil to have this kind of success.

"I think the exposure to the Seminole Cup in Florida, where he won his class, and his weekly practice on some of the targets that we saw overseas has brought his shooting up a notch and I was not surprised by this win," Azan said. "I told Shaun Barnes the day before (the shoot) that Nicholas has reached a new level and he's going to beat us." Up next for Chen is a sporting clay tournament in Bamboo, St Ann, on May 26 and 27.

Then it's on to the Junior National Clay Shooting tournament in June, sponsored by National Commercial Bank's Capital Markets and Best Dressed Foods. But the big one is the National Championships in July. Apart from doing well, the young ace, now in B class, is hoping to climb to A class soon.

"I'm hoping to get enough points. I should be able to move up. As long as I have the A class average, I should get there," he said confidently. He also thanked the management of the Jamaica Skeet Club for their continued support in his development.