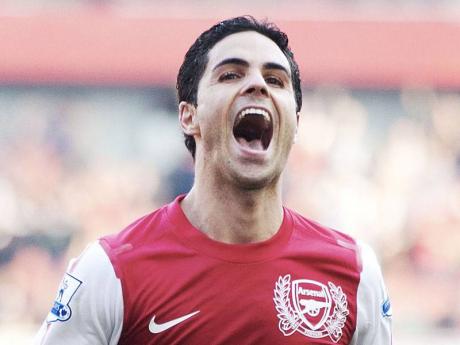 Arsenal's Arteta ... out for the rest of the season. 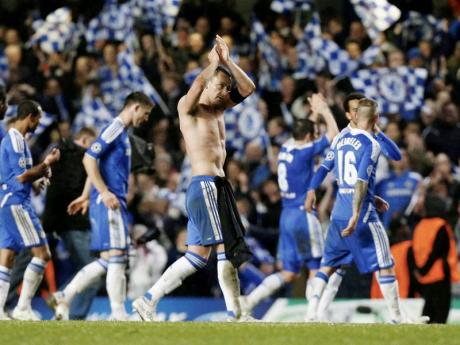 Chelsea's captain John Terry and his teammates celebrate their 1-0 win over Barcelona in the Champions League on Wednesday at Stamford Bridge. Chelsea will play Arsenal tomorrow in the Barclays Premier League. - AP
1
2

Before Chelsea can worry about a massive opportunity at the Nou Camp, they may have revenge on their mind as they face London rivals Arsenal at the Emirates Stadium in tomorrow's Premier League lunchtime kick-off.

Chelsea won 1-0 at home over holders Barcelona in the first leg of a Champions League semi-final Wednesday night. The second leg is set for Tuesday in Spain.

"It will go down as one of our best performances,'' said Chelsea captain John Terry, who has played with cracked ribs in recent weeks. "We had to be patient - we didn't touch the ball in the first 10 or 15 minutes. It was a tireless performance."

Didier Drogba scored just before half-time and the Blues held on from there despite being outshot 24-5.

"This group of players amaze me every time they go out on the pitch," interim manager Roberto Di Matteo said. "It has been a great European night for this football club. It is good that we didn't concede - we go into the second leg with a little advantage."

Now the Blues must quickly shift their attention to trying to gain a spot in next season's competition. Chelsea are in sixth place in the Premier League on 57 points - two behind Tottenham Hotspur and Newcastle United.

Arsenal are seeking their first double over Chelsea since 2003-04 after winning 5-3 at Stamford Bridge on October 29. Robin van Persie had a hat-trick with goals in the 85th and 90th minute breaking a 3-3 tie.

The Gunners, trying to solidify third place on 64 points, were shocked 2-1 at home to Wigan Athletic after conceding twice in the first eight minutes Monday night.

"Of course, we knew it anyway that the Chelsea game would be massive," Wenger told Arsenal's official website. "It is even more important now."

The Gunners had won five straight home Premier League fixtures since a 2-1 defeat to leaders Manchester United on Jan 22. They have not dropped back-to-back EPL home matches since November 2010.

"We were not sharp,'' Wenger said. "It's difficult to know why."

Drogba may not feature Saturday with the return leg in Barcelona in mind. The Blues could turn to Fernando Torres, who has found the back of the net once in his last 11 Premier League starts. Torres' lone appearance at the Emirates was with Liverpool in the 2008 Champions League quarter-finals.

"My players have shown the determination they have, with the courage to play against the top team in the world - they showed good quality," Di Matteo said. "It was a collective performance by the whole team."

Petr Cech's clean sheet Wednesday was in stark contrast to his form on the road in the Premier League. He has allowed nine goals with no clean sheets over his last six road fixtures.

Defender David Luiz remains out for Chelsea with a hamstring injury suffered in Sunday's 5-1 rout of Spurs in the FA Cup semi-finals.

Arsenal midfielder Mikel Arteta will miss the remainder of the season after suffering an ankle ligament injury against Wigan.