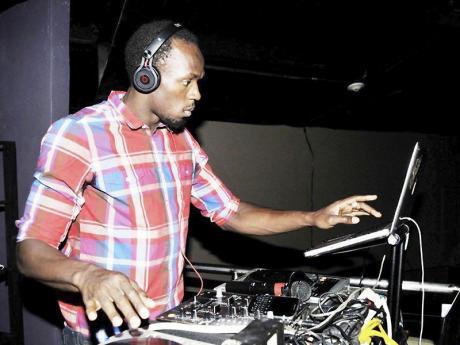 Usain Bolt adds to the excitement at Tracks & Records during the venue's first anniversary celebrations on Thursday. Top: An aerial view of Tracks & Records. - Contributed

It's been an "absolutely amazing year" at Tracks & Records.

That sentiment was shared by both Usain Bolt and Kingston Live Entertainment's (K.L.E.) Kevin Bourke, two of the faces behind Usain Bolt's Tracks & Records' achievements.

With a year of operation firmly secured for the lounge located at Marketplace on Constant Spring Road, the trendy nightspot became the location for an anniversary party on Wednesday night.

The frequency of these great moments, Bourke anticipates, will increase with the upcoming London Olympics.

"It's been absolutely amazing thus far; we have a year under our belt and during that time we've had some amazing promotions. There's always a buzz going on here, and leading up to the Olympics the energy level is just getting much greater as we get closer to the date," he said.

Tracks & Records' first year has also been special for Bolt, who says he has been getting a lot of positive feedback from people.

One of the most interesting aspects of the year for him, though, is the reality that persons are able to truly enjoy themselves while at Tracks & Records.

"To me it's all about the people. When I come in here, I always get a good vibe, they always show me a lot of love, and I think it's just the fact that people can enjoy themselves here all around that stands out to me," said Bolt.

With less than 100 days before the Olympics, Bourke revealed a plot to invade London.

"We're definitely going over to London and being a big part of the Jamaican vibe over there," he said.

So, London will get a taste of Tracks & Records. And possibly new records.

Bolt described the presence of the brand in London as "a big step for Tracks & Records to be seen on the international stage".

"I've been pushing it all throughout my interviews, so that's a wonderful feeling for it to be in London when I'm going there to do my best and to break records and to win," he said.

While in London, Bolt will not be enjoying himself at all … until after the Olympics, that is.

"For me, no enjoyment will go on until after, so hopefully everything will be good and we can go out. Family will be there, friends will be there, so I can hang out with them, party, have a look, stuff like that," said Bolt.

According to Bourke, Tracks & Records will continue to grow, especially with the nature of the projects scheduled to be launched in the next three months.

They aim to continue delivering fine entertainment packages to customers.

"There were several highlights in the year. We've hosted, for dinner, people such as Rita Marley, Chris Blackwell and a lot of other celebrities. A lot of Jamaican entertainers have been here, some gracing the stage as well. We've had live performances from I-Octane, Shaggy and Cocoa Tea. There have been a lot of highlights; it's really hard to choose one, but there is going to be a lot more," said Bourke.