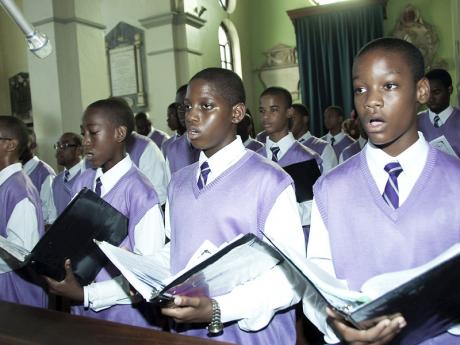 Members of the KC Chapel Choir in performance.- Contributed

The Kingston College Chapel Choir will perform at the National Cathedral in Washington, DC, as part of the Jamaican Embassy's first official event to commemorate Jamaica's 50th anniversary of its Independence.

This will be during the 73rd staging of the Cathedral's Annual Flower Mart, a festival organised by the All Hallow's guild of the National Cathedral.

Jamaica has participated in the festival for several years through floral works by a team headed by Marigold Harding, the custos of St Andrew.

During this year's event, Jamaica will be the 'honoured country'. Included in that will be the showcasing of various aspects of the country's culture featuring flora, art, literature, cuisine and music.

The choir was founded in 1947 to complement Kingston College's newly built St Augustine chapel and has established itself as one of the leading choirs in the West Indies.

It has recorded several LP recordings and CDs, the latest being Songs of Praise, which had a successful release last October.

In 2005 under Wayne Moore, choir director, the choir performed joint concerts with the Christ Church Cathedral Choir, Oxford, to sold-out audiences at the Holy Trinity Cathedral and the Parish Church of St Mark, Mandeville. In 2009, the choir led the singing at the closing Eucharist of the Anglican Consultative council at the Cathedral of St Jago de la Vega, Spanish Town, where the celebrant was the Most Reverend and Right Honourable Dr Rowan Williams, Archbishop of Canterbury.

Among its awards, the choir had the distinction of being the first West Indian choir to be elected to the Guild of St Nicholas by the Royal School of Church Music.

More recently, the postmaster general honoured the choir by publishing a $60 stamp bearing a photograph of the choir in December 2010.

In 2011, the choir achieved two distinctions and a merit on assessment by the Associated Board of the Royal School of Music in choral singing.

The choir is comprised of students from all grades at Kingston College along with a core of dedicated old boys. They have rehearsals twice weekly and perform more than 40 times per year at church services, concerts, school functions, weddings and funerals. They are led by choir director Audley Davidson, who continues to preserve the tradition of fine music started by Barry Davies and others.

The choir will be accompanied by Ann McNamee, who is the head of the keyboard section at the Edna Manley College of the Visual and Performing Arts' School of Music.

The Kingston College Chapel Choir will be featured at a black tie affair Gala Preview on May 3. The choir will then perform at the Flower Mart's opening ceremony on May 4, along with St Alban's Choir of the National Cathedral. Following this, the choir performs concerts at the cathedral in its role as a featured performer.

Audley Davidson has selected some works by classical composers, including Haydn, Bach and Rutter. However, the choir will feature Jamaican music with Marley's Redemption Song and Peter Tosh's Jah Is My Keeper, both from its latest CD and arranged by Audley Davidson.

The trip has been made possible through funding arranged by the Jamaican Embassy in DC and Kingston College old boys in the United States, Canada and Jamaica. The choir has been rehearsing regularly, despite the challenges of work and examinations, and the boys have promised to be good ambassadors of Jamaica so that their parents, school and nation can be proud of them.

'The choir has been rehearsing regularly, despite the challenges of work and examinations, and the boys have promised to be good ambassadors of Jamaica so that their parents, school and nation can be proud of them.'