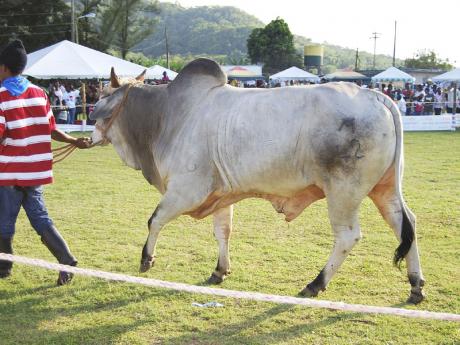 A farmer passing with his cow at the livestock parade at St Mary Agri Expo 2010. There was only one animal on show this year.

ANNOTTO BAY, St Mary:FOR THE second straight year, the highly anticipated cattle segment of the livestock display at St Mary Agri Expo held at the Grey's Inn Sports Complex was a major disappointment with only one animal on show. The lone Jamaican Brahman bull naturally took top honours, but for organisers it reflects a betrayal of trust from within the agriculture ministry.

For while unseasonal overnight rains washed out the show, at least one member of the organising committee is taking umbrage with the CEO of Agro Invest, Hershell Brown, contending he was instrumental in what is emerging as an orchestrated attempt to undermine the show.

With enough barns to house at least 20 head of cattle, the farm manager had been given the assurance a week before the Easter Monday event that animals from Minard would be on display. However, when Trevor Stoddart, chairman of the livestock exhibit committee, checked at the last minute, he learnt that instructions had been given that the animals would only be coming if the organisers could pay the transportation fee.